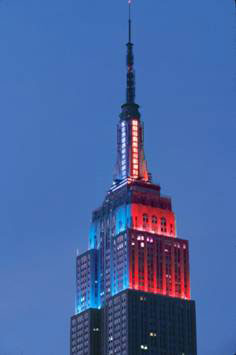 During previous elections, the colors at the top of the Empire State Building have shone red, white and blue--but this week, for the first time ever, it will honor the U.S. presidential election with a four-night celebration. The general manager of the building, James Connors, says that the 4-night lighting celebration is "due to the excitement" of this year’s race.

As a bit of history, the first light to ever shine on top of the building was in 1932, "alerting people for 50 miles that Franklin D. Roosevelt had been elected president of the United States."

#4 nights
#election night
#empire state building
#lights
Do you know the scoop? Comment below or Send us a Tip