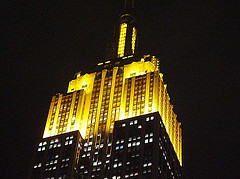 Did your commute feel more like Springfield than New York today? If you're out and about than you'll likely run into the Simpson-izing of Manhattan! Too bad we don't have a monorail here.

Earlier this year upon The Simpsons Movie release, we saw 7-11s transform into Kwik-E-Marts, and today with the DVD hitting stores, we'll be getting a lot more than KrustyO's.

Today's Simpsonfest is an all-day Fox affair in the heart of the city marking the hit toon's DVD release. Anyone in Midtown will find it difficult to miss the yellow-jacketed street teams, the "Simpsons on Ice" show at Bryant Park, the giant inflatable Homers and the Empire State Building lit up yellow in the landmark's first-ever movie tie-in.

First ever movie tie-in? What was King Kong doing up there in 1983? That said, this promotion would be a lot cooler if they got a giant inflatable Homer scaling the building. In addition to the aforementioned there will also be 2,500 mega-donut balloons lining 42nd Street, and a Times Square street team will distribute yellow Santa hats. We wonder if Fox knows they're getting free plugs in Queens with these Simpsons murals.

If you feel like you've been inundated with movie promos around town lately, you aren't alone -- many are wondering if Manhattan is becoming an important "movie landscape" both on and off-screen. Variety delves into the topic, saying "It isn't that filmmaking in Gotham or the ad biz have only recently materialized. It's that the marriage of mass appeal and the ability of large-scale productions to be mounted here has turned Gotham into a reinvigorated production and promotional hotspot." We can't wait for the Cloverfield promotions!

Photo via ses7's flickr. Old photo of Kent Brockman reporting from the 7 train in Queens removed by request.