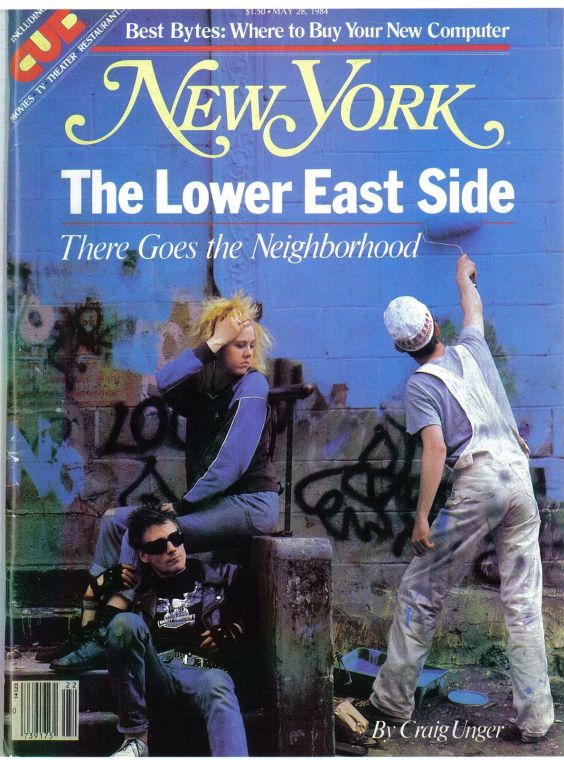 Even back in 1984 there was mainstream media attention on the ever-changing landscape of the Lower East Side and East Village. Real estate was "exploding," chain stores were popping up, and galleries were abundant. The New York Magazine cover story on May 28th of that year was titled: The Lower East Side -- There Goes the Neighborhood.

Luckily, someone recently scanned the entire article, which could almost read like it was written today, if some more commas and zeros were added. One story in the piece focuses on two young entrepreneurs, Harry Skydell and Samuel Glasser, who purchased the Christodora House (on Avenue B overlooking Tompkins Square Park) in 1983. The man they bought it from paid $62,500 in 1975; they laid down $1.3 million, and by 1986 the building housed luxury condos. Iggy Pop was one of the first to move in, writing his “Avenue B” album there.

The luxury wasn't sweeping the neighborhood just yet, however, and the Christodora condos reportedly sparked "neighborhood anti-gentrification demonstrations" around that time. Long time residents and new pioneers were converging, and as one woman told New York Magazine: "I've lived in my rent-controlled apartment for years and pay $115 a month. I live on the Lower East Side. The young kids who just moved in upstairs and pay $700 a month for the same space -- they live in the East Village."

Check out the entire article here, complete with some great old photos of the neighborhoods. [via Lowlife]