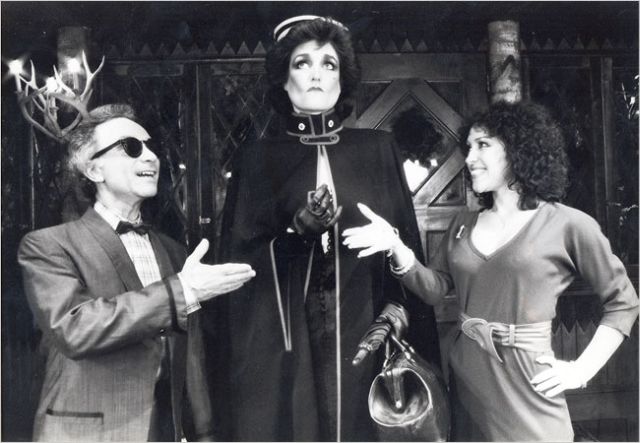 How bad does a show have to be to become good? That’s the question posed by self-described “part-time conceptual artist” John Borek, who has recently revived the notorious 1983 Broadway flop Moose Murders in Rochester. The murder-mystery farce by Arthur Bicknell, which takes place one dark and stormy night at an isolated lodge, closed after 14 performances and widespread critical derision; the term “Moose Murders” has since become a Broadway euphemism for theatrical disaster.

Reviewing Moose Murders for the Times in 1983, Frank Rich wrote, “I won't soon forget the spectacle of watching the mummified Sidney rise from his wheelchair to kick an intruder, unaccountably dressed in a moose costume, in the groin.” Actually, that sounds kind of hilarious. Of course, so does Teaneck Tanzi, the coed wrestling musical starring Andy Kaufman and Debbie Harry that immediately closed after opening night on Broadway – the same year as Moose Murders, which Rich panned with virtuosic glee:

From now on, there will always be two groups of theatergoers in this world: those who have seen Moose Murders, and those who have not. Those of us who have witnessed the play that opened at the Eugene O'Neill Theater last night will undoubtedly hold periodic reunions, in the noble tradition of survivors of the Titanic… The set represents a lodge in the Adirondacks and is profusely decorated with the requisite stuffed moose heads. Though the heads may be hunting trophies, one cannot rule out the possibility that these particular moose committed suicide shortly after being shown the script that trades on their good name… The ensemble stumbles about mumbling dialogue that, as far as one can tell, is only improved by its inaudibility.

New Yorkers will have the chance to join this elite circle of survivors on August 9th, when the Borek performance art production is performed at Sardi’s. His low-budget stage reading, with music, killed ‘em in Rochester; now Borek tell the Times he’s excited to bring Moose Murders back to the scene of the crime: “I want it to be just about the joy of performing. I want as little professionalism as possible to come out.”