Last night Matthew Weiner discussed Mad Men with writer A.M. Homes at the New York Public Library. The 90-minute talk included Weiner's explanation of the entire series, as well as the finale. Weiner claimed this was the only talk he'd do after the show ended: "I’m doing one talk. I’m going to have a conversation with a writer friend of mine, A. M. Homes, at the New York Public Library, and that will sort of be the decompression of it."

Weiner says the show was essentially telling the story of the era of the '60s, noting that as the series moved into the latter half of the decade, "we started making it less poetic and less implied, less subtle." Ginsberg's entrance into the show was one way of portraying that. Weiner added, "This whole last season... the 14 episodes... was the idea that the revolution failed in some way, and it’s time to deal with what you can control, which is yourself. This turning inward. And the fact that 'Is That All There Is?'—the most existential pop song in history—is a huge hit in 1969... and I mean huge, everybody loves that song... told me I'm right. Everybody is feeling this."

When we reach the finale, we've been brought from Madison Avenue to a spiritual retreat in Big Sur. Don is "a fugitive, in his life. I like the idea that he would come to this place and it would be about other people. And a moment of recognition." On casting his everyman, Leonard (played by Evan Arnold), Weiner told casting, "We need a guy for this character. It's probably the most important role in the series. I need somebody who’s not famous, and who can cry, and really do it... like ugly real things." 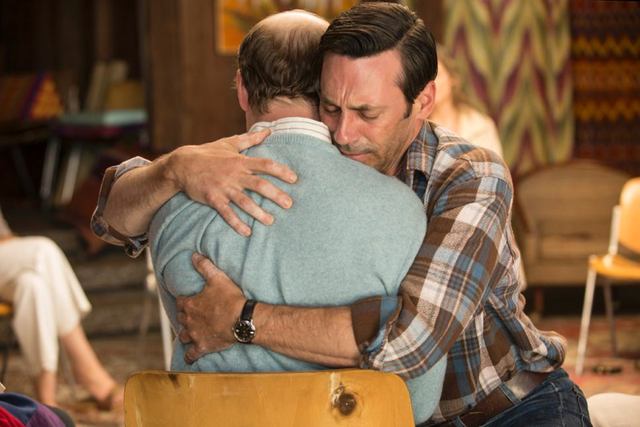 Leonard was created from watching real films from Esalen, Weiner says, "These guys have just had it. The alienation created by success, the political and racial tension, the technology... these guys are gonna crack. This journey has been Don having all his material needs met, he's one of the richest people—it's a 1/2-percent, it's not even a 1% back then—and what else is there? We tried to do this journey of turning inward, for everybody. And he stripped it all away I think, that was the idea, that was what we tried to do."

As for the ending, which some believe was ambiguous, Weiner did not offer his own clear interpretation (as Jon Hamm has), saying, "I have never been clear, and I have always been able to live with ambiguities. In the abstract, I did think, why not end this show with the greatest commercial ever made?" He offered this about the Coke ad itself, which he knew would end the show since season 4 (he also knew about Betty's fate by that point: “We loved the idea of her realizing her purpose in life right as she ran out of time.”):

"I did hear rumblings of people talking about the ad being corny. It’s a little bit disturbing to me, that cynicism. I’m not saying advertising’s not corny, but I’m saying that the people who find that ad corny, they’re probably experiencing a lot of life that way, and they’re missing out on something. Five years before that, black people and white people couldn’t even be in an ad together.

And the idea that someone in an enlightened state might have created something that’s very pure—yeah, there’s soda in there with a good feeling, but that ad to me is the best ad ever made, and it comes from a very good place. That ad in particular is so much of its time, so beautiful and, I don’t think, as—I don’t know what the word is—villainous as the snark of today.”

You can watch the full talk below.

#finale
#mad men
#matthew weiner
#nypl
Do you know the scoop? Comment below or Send us a Tip