Last night on Mad Men, the teenage girl in Pete's driving class asks, "Didn't you hear about the sniper at the University of Texas today? Just two weeks after those nurses in Chicago... things seem so random, all of a sudden." Later, at Pete and Trudy's dinner party, the incident comes up again, when Megan says, "They said he had a brain tumor, he kept warning everyone." The sniper they're referring to is Charles Whitman, and when someone at the dinner table gets his last name wrong, Don corrects them saying, "it's Whitman" (as in Dick Whitman, Don's true identity). 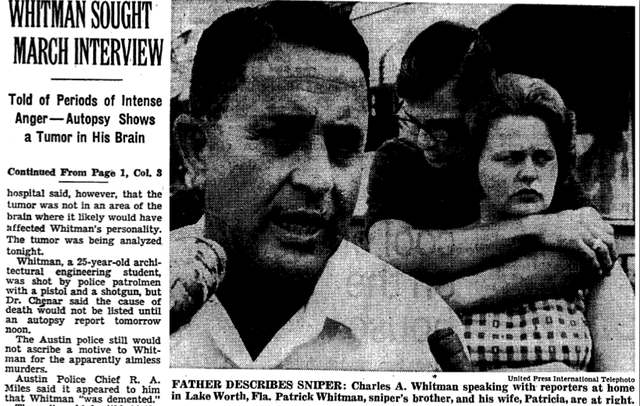 Whitman was a student at the University of Texas at Austin, and a former Marine. On August 1st, 1966 he opened fire on the university's campus, killing 16 people and wounding 32 others—he was eventually shot and killed by the Austin Police Department's Houston McCoy. Prior to the incident, Whitman had killed his wife and mother.

The NY Times heavily covered the incident, which made their front page. In their articles, Whitman was called "the typical American boy." On the day of the shooting, they wrote: "The tower that today served as a fortress for Charles J. Whitman is the tallest building in Austin, jutting 27 stories above the normally placid campus.... the tower, which houses the university's library and administrative offices, is the focal point of the campus and its observation deck. This deck, from which the sniper did his shooting, is one of the city's major attractions." (Read more about the memorial at the University right here). Later, the paper noted one of his guns was purchased at Sears that morning, and that he told a doctor, he sometimes thought about shooting people. 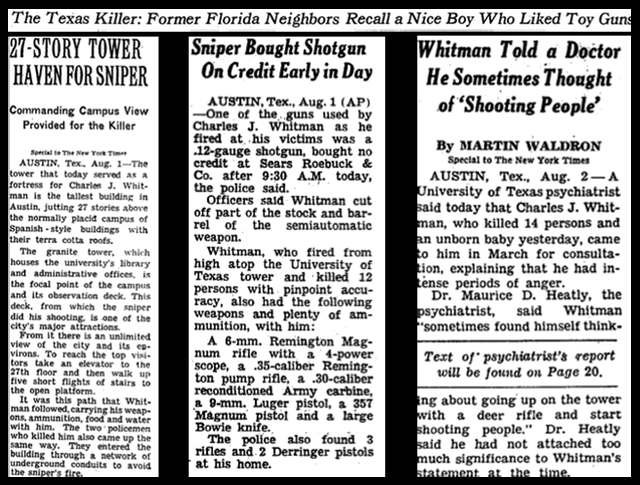 Previously:Mad Men mentions that "thing" that happened in Bed-Stuy, and Don and Harry go to Queens to see The Rolling Stones, and the Richard Speck murders become a backdrop.

#charles whitman
#flashback
#history
#mad men
#mad men history
Do you know the scoop? Comment below or Send us a Tip