The August issue will have two covers 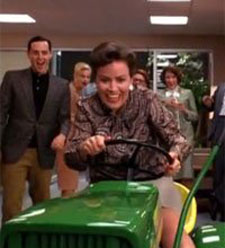 A Mad Men woman has found her way to the cover of Playboy magazine, and she's got a full-on mid-century themed topless spread inside. No, gents, it's not the lovely Christina Hendricks, and it's not January Jones (who was practically topless in GQ last year)—it's switchboard operator Lois Sadler! You may remember her from last season's tractor accident.

In real life that's character actress Crista Flanagan, and the Daily News reports that she was intrigued by the magazine's pitch of recreating scenes out of '60s-era issues. She also commented on their invitation, saying, "The parts I play, I'm usually a crazy heroin addict or a lunch lady. Nobody's ever asked me to take off my clothes, or even kiss somebody. I guess I haven't been seen as a sexy person, and sometimes not even as an attractive person."

The August issue that Flanagan appears on will also include reproduced ads from that time! Don Draper would be proud. (And we'll have more on the Season 4 premiere later this week—it's airing this coming Sunday, but AMC was nice enough to send it to us last week.)