Watching Kids on the big screen with hundreds of people is uncomfortable, even more so than watching it with a few friends, in large part because of when people laugh. Like when Casper, one of our anti-protagonists, played by the late Justin Pierce, beats a man in Washington Square Park over the head with a skateboard for no reason. Or when he begins raping an unconscious, HIV-positive Jennie, played by an 18-year-old Chloe Sevigny, she half-wakes, and he says "Don't worry, Jennie. It's me, Casper." BAM Cinema Fest marked the movie's 20th anniversary last night with a screening, and it's still jarring two decades later. All the more so because, during the Q&A that followed, director Larry Clark called it "a comedy."

Here are some of the highlights of the discussion including Clark, Sevigny, screenwriter Harmony Korine, Rosario Dawson, and Leo Fitzpatrick.

Korine on seeing it again: I forgot how funny it was. I was so shocked when it came out, but I was laughing my as off when I saw it [just now].

Hynes: It is very funny.

Clark: It's a comedy. [The audience laughs hard at this. Clark does not.]

Korine on whether he expected the movie to become a document of its time: It's hard because I have to really go back 20 years. I was stoned a lot of those years. That movie could never exist today. For a lot of reasons, but it's pre-cellphone, so you could never make that movie because [Jennie] could just call on a cellphone. Really, it's like you can't get lost in movies now because everyone has GPS.

The whole movie is weird to me because none of us had ever done anything before. We were all amateurs. [Clark] was already a great artist, but he had never directed a movie, I had never written a movie, no one had ever acted before.

Clark: It started out with a lot of documentary factors in it because I had hung out with skaters for about three years and everything in the film had happened except for Jennie.

I told Harmony I didn't want to do a documentary. So we had to have a hook. We had to have, like, the maiden tied to the railroad tracks. And I came up with this idea about a girl getting HIV from one sexual experience. And that's what tied it together and made it a feature rather than a documentary.

When we cast it, at the time [Korine] wrote it, we were talking about real people. A lot of the people that he was writing about were people that were based on people I knew. And when we cast the film it was hard to cast but it was not that hard to cast because we used a lot of the people the characters were based on, like Justin [Pierce] and Harold [Hunter]. But we couldn't cast Jennie. We were like two days before the shoot and we still hadn't cast Jennie and we finally realized we couldn't cast Jennie because there was no Jennie. Jennie was made up.

On a Friday night, we were shooting that Tuesday, we called Chloe [Sevigny] up, and she said, "Give me the weekend to think about it." And then she played Jennie.

Korine: I remember always wanting it to be like the real world pushed into something hyper, more like a movie. The AIDS thing was almost like Jaws, like the device that propelled. We didn't know anything about the disease except that we really didn't want to get it. But what Larry and I were really excited about was the ambience. It was the tone and the feel and the realness of the moment. We knew it was special.

Clark on casting Fitzpatrick: Guys that get girls are not particularly the best looking guys. Guys who get girls are the guys who think about girls all the time. All they think about is pussy. You see guys bald-headed, five feet tall, smoking cigars, with beautiful, beautiful models.

The reason that I liked Leo was that he wasn't typecast, the blue-eyed blonde-haired [heartthrob]. And I loved his voice. Nobody could understand his voice because we can't understand him. When I cast him [producer Cary Woods] said we need to give him voice lessons. I said no,

Fitzpatrick: I wasn't so comfortable with my voice either. A lot of people ask me, "Why don't you watch the film?" "Oh, that's a long time ago. I don't need to watch the film," is what I tell people. But really I don't wanna hear my fucking voice. It's like purgatory listening to that for two hours. You gotta understand: this is when we're at our most awkward. This is pure puberty.

Clark on casting, generally: A lot of the characters were cast against type. Rosario was very young, she was 14 years old and hadn't had very much experience at all, if any. Chloe was a club kid. And so we made Chloe the virgin and made Rosario the—

Dawson: —promiscuous one. I was so seasoned at 15. What I forgot watching it was that I'm saying I'm 17 in the movie. It's hilarious. I'm supposed to be older than [Sevigny] in the film and have had all these experiences and all I can remember is us sitting when I'm waiting to get our results and I just told [Sevigny] I had my first kiss playing spin the bottle in Tompkins Square Park. "And he put his tongue in my mouth like this..." 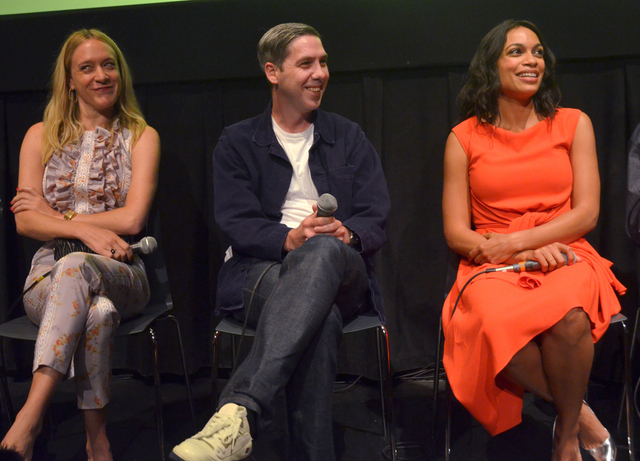 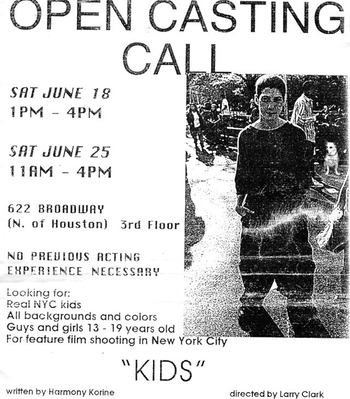 The casting flier
Fitzpatrick on casting:

The thing that I think was really incredible was they'd bring in four guys, four girls, whatever, and they'd have them talk about sex. And these are all kids between 13 and 17, so of course they're acting, trying to seem like they've had more sex than they had. So it's a good way of telling who's good about bullshitting. I'd only had sex maybe once—and that's a strong maybe. But I'm sure I must have spun a yarn when I was in casting.

Clark on how 1994 informed the movie: Schools started giving condoms out in school that year. And the Catholic church was up in arms about it. So Planned Parenthood was giving condoms away to everybody. And in the parks all the kids had strings of condoms around their necks. It was in the news, and that's kind of where the idea for the plot point to hang everything onto came from.

Clark on New York filming complications: I remember we were doing one scene outside with Javier [Nunez] and this drunk guy came busting in and disrupted five or six takes in a row. We had policemen, hired to protect the set. So I went over and told the cop, "Can you do something about this guy?" They said, "What do you want us to do, shoot him?"

Dawson on her hopes for the movie: At the time, they found me on a stoop. I was like, "They're picking people up off the street. This is going nowhere." "Sure you're a photographer-turned director, a 19-year-old who wrote a script in two weeks. This is going places."

Fitzpatrick on fan reactions as the movie gained a cult following: I went back to work in a skateboard shop and I would get a lot of threatening calls.

Sevigny: I get a lot of tearful hugs.

Dawson: I get quoted my lines, which is a bit awkward, depending on where you are. "We're at Disneyland. Please."

At this point, the crowd laughed, and groaned, its loudest.