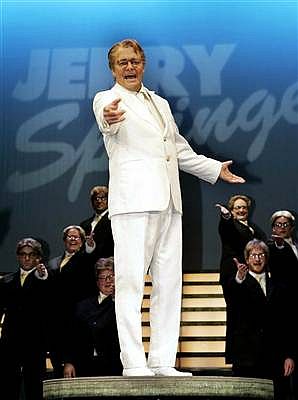 Bill Donohue, president of the Catholic League – a group that exists to promote Bill Donohue, er, prevent “virulent anti-Catholicism” – is leading a protest against Jerry Springer: The Opera, which will be performed at Carnegie Hall on January 29th and 30th and stars Harvey Keitel as Springer. The show chronicles Jerry Springer’s adventures in hell, where he's forced to host an outrageous talk show whose guests include Adam and Eve, Mary, Jesus, and, as his crowd “warm up” man, Satan.

Donohue’s dutifully parsed the script and excerpted all the blasphemous material, which may not be the best tactic because after reading his synopsis, we realized we have got to see this. A sample:

Jesus then grabs the biscuit from Satan and holds it above his head before throwing it down as he sings: "I am Jesus, son of man, son of Mary, son of God. So do not, do not, do not fuck with me. I do not want your biscuit. I want your love and your respect, for I am love and I love all mankind." The chorus then sings, "Jesus is gay, Jesus is gay."

Okay, so maybe that does sound a little blasphemous to Catholic ears, as well as the part where the choir sings about Mary being raped by angels. But isn’t it the point of the outré libretto to use taboo subject matter as a cudgel to satirize the tabloid culture Springer hath wrought? And come on, the part where the choir triumphantly sings “Jerry Eleison”? Even the pope would have to admit that’s gold.

Speaking to amNew York, Donohue concedes that “the producers have a First Amendment right to stage the musical.” But his fear is that if Jerry Springer: The Opera isn’t stopped now, it might head for an extended run on Broadway, thus damning the entire Times Square area straight to hell. (An attempt to stage the show on Broadway in 2004 was stymied by financial problems.) Carnegie Hall reps deny the two night concert production is being staged as a tryout for hell or Broadway.

Photo from the British production of Jerry Springer: The Opera, which also drew outrage.