Fuerzabruta: Too Brutish for Times's Taste 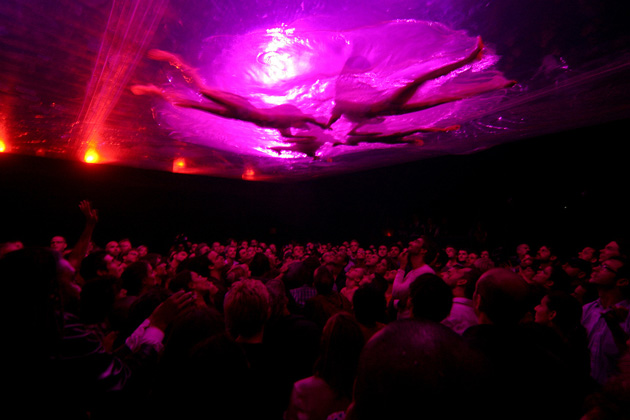 The New York theater world’s obsession with the almighty Times, which was once astutely likened to kremlinology, has often erupted in strong words about reviewer Charles Isherwood, whose opinion was recently derided as “antique snobbery” by TONY critic David Cote. So it was amusing to discover today that not only had the Times assigned the more mainstreamish Ish to review Fuerzabruta, the latest wet and wild spectacle from the people behind De La Guarda, but that he’d been forced to dance a little jig as well:

I am fiercely averse to audience participation, and discovered that my habitual routine for repelling the attentions of frisky cast members — tightly crossed arms, forbidding stare — was useless here. I was set upon by a small, feisty fellow who mocked (rather well) my glowering stiffness, grabbed me by the shoulders, and insisted I join the jumping throngs. I compromised with a hop or two, and he left me in blessed peace.

Unhand me, rapscallion, lest my cane find your backside! Since the Times dropped two juicy hype-pieces building up to Fuerzabruta's opening, their decision to send in the Ish – as opposed to a more frequent "downtown" critic like Jason Zinoman – may have been the Central Arbiter’s way of striking a wide “fair and balanced” stance. (Or did someone lose a bet?) The review is as funny as it is blasé, though Isherwood takes pains to point out that his taste and age group land him squarely outside the target market for the spectacle, harrumphing that the ideal audience for such diversions are “clubgoing, overstimulated college kids not worried about soiling their togs from H&M.”

So what’s it about? Like its predecessor De La Guarda, it’s not “about” anything in a narrative sense – think Cirque du Soleil on adderall. The extravaganza aims to actively engage the crowd with a whirlwind of flashing lights, gravity-defying acrobatics, confetti, pounding techno and aquatic escapades. That last bit is Fuerzabruta's much-ballyhooed pièce de résistance: watch in amazement as, inches above your head, a quartet of lithe ladies splash around in a puddle! It’s clear from the Times’s two lavish slide shows that Fuerzabruta makes for stunning photography, but at 70 declining dollars a ticket, does it make enough of a splash to warrant the neck-ache? If you’ve seen it, let us know in the comments.