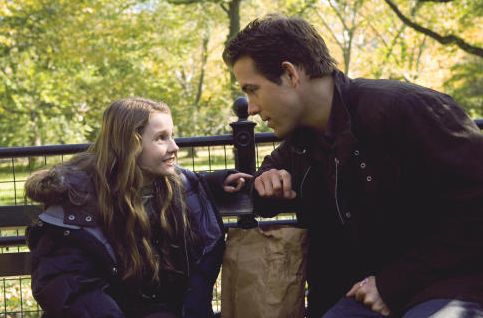 Hallmark isn't the only one capitalizing on the L-word today, Hollywood has a stake in your heart as well -- invading the big screen with yet another Valentine's Day release. This time Little Miss Sunshine, Abigail Breslin, and soon-to-be Mr. Scarlett Johansson (?), Ryan Reynolds, team up for a tour de force of l-o-v-e in Definitely, Maybe (a nod to Oasis's debut album?).

The romantic comedy is brought to you by the same people that brought you films such as: Notting Hill, Bridget Jones's Diary and Love, Actually; they moved their backdrop from London to New York City for this one, and thankfully left Hugh Grant out of the picture. Boyfriends, here's what you'll see when your girlfriends drag you to the cineplex tonight:

Will Hayes, a 30-something Manhattan dad is in the midst of a divorce when his 10 year old daughter, Maya, starts to question him about his life before marriage. Maya wants to know absolutely everything about how her parents met and fell in love. Will's story begins in 1992, as a young, starry-eyed aspiring politician who moves to New York from Wisconsin in order to work on the Clinton campaign. For Maya, Will relives his past as a idealistic young man learning the ins and outs of big city politics, and recounts the history of his romantic relationships with three very different women.

Nothing says heartfelt tearjerker like a Clinton political campaign! The movie is currently scoring a 78% rating on Rotten Tomatoes, and got shrieking reactions from NYMag. Heck, even the NY Times' AO Scott liked it, calling it "winning" and "nimble." View the trailer and get showtimes here.