To a degree, Linklater is right—it's a pitch-perfect depiction of the last day of school, May 28, 1976, in a small Texas town where the girls wear incredibly tight jeans, guys have feathered hair, and they all cruised around trying to find beer and stuff to do. But the movie, filmed in Austin in 1992, was released in 1993 as the follow-up to his groundbreaking debut Slacker. Linklater pointed out it was a studio film, released by an arm of Universal Pictures, but studio executives were nervous about it. "It was my sophomore slump," the now Oscar-nominated auteur wryly said.

Three of the movie's stars, Jason London, Anthony Rapp and Parker Posey joined Linklater and the NYFF's programming director, Kent Jones, for a discussion about the movie's legacy. Linklater half-joked that when the movie came out, "Hazing was revitalized!"

Naturally the killer soundtrack was the subject of the first question—did Linklater get all the songs he wanted? The music includes "Slow Ride" by Foghat, "Hurricane" by Bob Dylan, "School's Out" by Alice Cooper, "Rock and Roll All Nite" by KISS and, in the opening sequence Aerosmith's "Sweet Emotion"—Linklater proclaimed he was happy with what he got. He did try for Neil Young's "After The Gold Rush" but said he didn't want Led Zeppelin's "Dazed and Confused," saying the "movie is better than" the song. One of the cast members pointed out that back in the early 1990s, lots of bands hadn't realized that having their music in film or TV was actually a good thing.

London, who played the film's conflicted pothead-football quarterback hero Randall "Pink" Floyd, fondly remembered how wonderful the experience was, how Linklater really listened to his and other cast members' concerns and suggestions. London also said, "We depleted Austin of pot. True story."

As for how Posey, a "good Catholic girl," channeled Darla—the crowd-pleasing but deranged bully—she drew upon the "bad ass and crazy" twins at her high school. Posey also explained that her aunt grew up in Texas and had hazing horror stories: She tried to convince Linklater include one of her aunt's incidents (involving dental floss and oysters) but that was too much for him.

On the male side of hazing, London said, "We got to design our paddles!" Linklater revealed that the actor who played Hirschfelder actually got hurt when his character was paddled, in spite of the padding. Actor Cole Hauser, who played senior Benny O'Donnell, fell when he got out a truck and had actually hurt his knee, so he took out some of his anger on Hirschfelder!

"Tony's probably working for a non-profit," opined Rapp, who played cerebral Tony with the disturbing Abraham Lincoln dream, when asked what the characters would be doing today. Posey decided that Darla would be "working for Tony... She's an activist in San Francisco" because there's so much to be mad about. 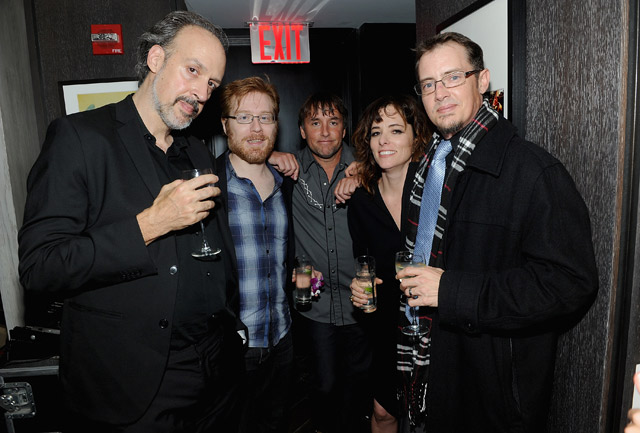 At the after-party, sponsored the Film Society of Lincoln Center's New Wave program, we mentioned to Posey that her work on Louie was great and that she's worked with some of our other favorite directors, like Hal Hartley and Christopher Guest, in addition to Linklater. She wistfully referred to the heyday of independent films, in the 1990s and earlier 2000's, telling us, "Those movies were made in a special time."

On the floor Freshman bitches! pic.twitter.com/1HpuKfcbli