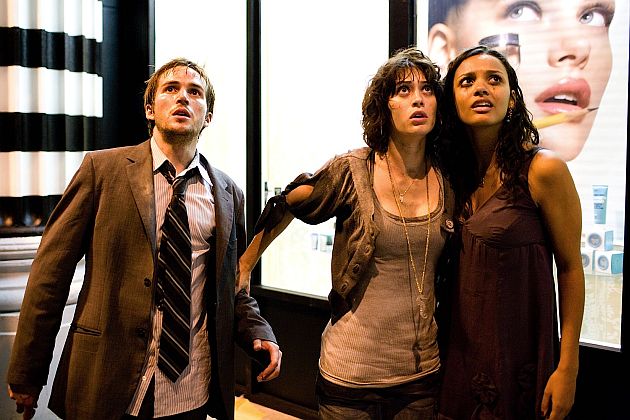 The last sentence uttered before all hell breaks loose is, “Forget about the rest of the world and hold onto the ones you care about.” Though probably unintentional, those words of brotherly advice – spoken to a lovesick young yuppie named Rob – perfectly sum up the prevalent attitude in fin de siècle New York: the world’s spinning into a cataclysm of total war and catastrophic climate change, but fuck it; let’s party and get ours. And in Cloverfield, the well-connected young Manhattanites at the story’s center do indeed get theirs, just not the way Gossip Girl said they would.

And boy is it a blast to watch them get it. From the first shaky, handheld frame, looking out of a deluxe apartment in the Time Warner Center onto Central Park, you’ll be itching for it, and as you’re forced to sit through their totally boss going-away party for Rob – all seen through one bro’s sloppily-handled video camera – the anticipation becomes almost unbearable. By the time that massive beast slouches toward lower Manhattan, bowling the head of the Lady Liberty with a nonchalance befitting the Bush administration, you’ll be almost as bloodthirsty as the monster. 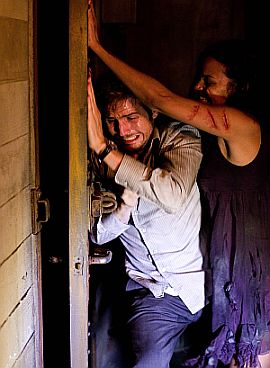 It’s no accident that Cloverfield, which opens Friday, is not seen through the eyes of social workers and busboys. Our heroes here are the self-absorbed young Turks buying the condos, crowding the Meatpacking district and pricing the rest of us out of town – and as depicted in Cloverfield they can be just a little annoying at times. (Especially the cameraman.) This absence of empathy is screenwriter Drew Goddard’s smartest move in what turns out to be a very smart script – with this much relentless tension in a movie, it’s nice not to care so much about the monster’s quarry. And the action is so brutally immediate you'll actually be much more concerned with saving your own skin.

Cloverfield is exactly the engrossing, top-shelf disaster porn we’d hoped for. (Whether post-9/11 New Yorkers will flock to see their city destroyed for entertainment is another question; the I Am Legend response suggests yes.) Producer J.J. Abram’s risky gambit to make a monster movie solely from the vantage point of victims on the ground, “to see it not from God’s eye or a director’s or from an omnipotent point of view” succeeds in spades. But be warned; the footage is entirely handheld and we’re very, very glad we didn’t see it with a hangover. Spoilers galore after the jump and our interview with director Matt Reeves here.

For those just joining the hypemachine, the premise of Cloverfield is that you’re watching a tape recovered by the military in Central Park in an unspecified future, documented by a dwindling quintet of friends running from a massive, malevolent beast unleashing an army of horrid, Labrador-sized scorpion creatures who skitter through town biting any survivors who don’t get stomped by mommy. These buggers are nasty.

After an attempt to evacuate via the Brooklyn Bridge is foiled when the structure spectacularly collapses, they scramble back to Manhattan, one less in number. Through this entire first act, the monster’s glimpsed only fleetingly, but the action is wholly gripping and at times very funny; when the Statue of Liberty’s head rolls to a stop in the middle of a downtown street, a crowd of cellphone videographers immediately gather to get some killer Youtube footage.

Instead of joining the herd of refugees marching downtown, the gang of four turns uptown, where Rob’s would-be girlfriend has called for help after being trapped by falling debris. In one of the film’s more remarkable special effects, they walk through the subway tunnel from Spring Street to 59th Street in about ten minutes, only to find one tower of the Time Warner center leaning despondently against the other. As the monster savages buildings all around them, they miraculously manage to rescue the affluent ingénue but… well, you kind of already know how it all ends by this point – Cloverfield “spoils” itself in the opening frame with a title card explaining where the footage was found!

But that doesn’t matter; it’s a thrilling ride with flawless special effects and, in the final minutes, one really sweet monster money shot sure to leave every fan boy in the house breathless. Our only real gripe is, couldn’t the monster have at least smashed a couple Starbucks and Duane Reades? We've got enough of those to last us through any apocalypse.