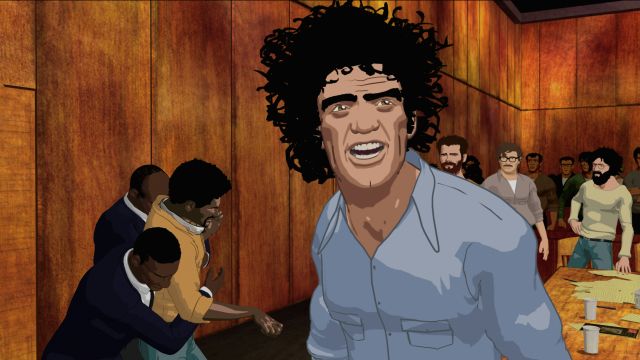 At the 1968 Democratic Convention, anti-war activists were denied permits to demonstrate by the city and spent most of the week getting their skulls cracked courtesy of the Chicago Police Department, witnessed by a television audience of over 50 million. A year later, eight of the most high profile radicals – guys like Abbie Hoffman and the Black Panthers' Bobby Seale – were tried on charges of conspiracy and inciting riots. The courtroom was a circus, with Seale gagged to silence his outbursts and ultimately sentenced to four years for contempt, while testimony from counterculture icons such as Phil Ochs, Arlo Guthrie, Norman Mailer and Timothy Leary drew massive crowds for the National Guard to disperse.

Hank Azaria (pictured after the jump), who does Moe Szyslak and other characters on The Simpsons, lends his voice to Chicago 10, a film about the trial directed by Brett Morgen (The Kid Stays in the Picture). Opening today, Chicago 10 intersperses archival footage from the convention chaos with 3D animation recreating the trial, using the transcripts as the script. Azaria, who is currently starring in The Farnsworth Invention on Broadway, voices Abbie Hoffman and Allen Ginsberg.

At a press junket Monday, Azaria called himself a “history and technology geek” who was fascinated to revisit the events of ’68 – he was four at the time – “especially given how relevant certain aspects of the film are to today. The movie is saying that it’s okay to protest and disagree with the war; it doesn’t make you un-American.” Morgen, the director, insisted that “Chicago 10 is not intended to be a history lesson; it’s a retelling of a myth. It eschews talking head interviews and narration and treats historical material in the present tense.” He elaborated: 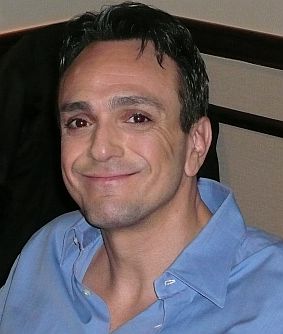 What we wanted to do with Chicago 10 is something that was uniquely suited for the cinema, a sort of sublime visceral experience… Chicago 10 is not a film about 1968, it’s a film about today. So [in the film] when Allen Ginsberg’s on the witness stand and says, ‘politics is theater and magic, it’s the media’s manipulation of imagery that hypnotized the country into believing in a war that didn’t exist’, he’s not speaking about Vietnam, he’s referring to Colin Powell’s testimony to the United Nations.

Chicago 10 also features the voices of Mark Ruffalo, the late Roy Scheider, Nick Nolte, James Urbaniak, Jeffrey Wright and Live Schreiber, among others. A preview of the film is here. And before leaving, Azaria revealed what’s next for him after The Farnsworth Invention closes next week: He co-stars in The Year One a Harold Ramis “Bible movie” with Jack Black and Paul Scheer; he also has a part in Night at the Museum 2: Escape from the Smithsonian with Ben Stiller.