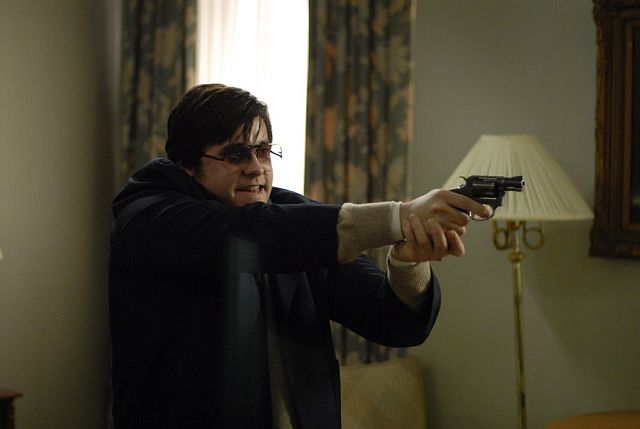 Put it this way: Jared Leto should stay focused on his music career. It would be a shame if his acting aspirations distracted him from his totally boss band, 30 Seconds to Mars. Though one can see how he’d have a hard time turning down the role of Mark David Chapman, John Lennon’s murderer. After all, he’s a perfect fit for the role: both Leto and Chapman are unstable, grandiose footnotes whose insecurities drive them to violent acts that horrify millions of peaceful music lovers.

It’s not that Leto’s acting is dreadful, it’s that Chapman is, and the film locks you inside his sick head while shedding no light on the causes for his mental illness. The action, if you can call it that, consists of Chapman loitering outside the Dakota and creeping out the other groupies (Lindsay Lohan among them), while drawing paranoid connections between his assassination plans and The Catcher in the Rye. Chapter 27's title comes from Chapman’s notion that by killing the “phony” Lennon, he was acting out a new chapter in Salinger's novel, which ends at 26. Deep, huh?

There’s not much to watch besides Chapman’s incessant crazed ranting as the film plods inexorably toward the final deed, which wouldn’t be such a drag if writer/director Jarrett Schaefer explored his derangement with some sort of formally adventurous aesthetic. Instead, Chapter 27 bobs on the surface like dead ducks in the Central Park reservoir, while the dread of what’s to come gnaws at the pit of your stomach for 85 minutes.

Supporting characters like Lindsay Lohan, who, perhaps by contrast, comes off as refreshingly charming and adorable here, can’t wait to get the hell away from the self-absorbed Chapman. Should you find yourself stuck watching this oppressive snuff film, you’ll have no problem empathizing with her.