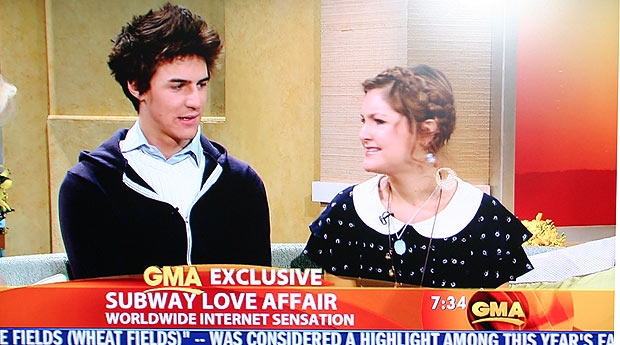 Sometime before 8 this morning, Patrick Moberg and Camille Hayton introduced themselves to Good Morning America viewers, Diane Sawyer and hopeless romantics everywhere. The Subway Cyrano met up with his mystery lady last night for dinner, where they said they "clicked." Hayton suggests the subway moment was serendipitous because she wouldn't have been on it (going to a friend's place) if her house hadn't just burned down.

Moberg is compared to a Hollywood leading man, willing to do anything to "get the girl," this is prequeled and followed by a montage of movie moments (Sleepless in Seattle, South Pacific, Princess Bride). To the cynical haters: Moberg didn't mention his job, Vimeo or Jakob Lodwick. Also, Camille is adorable, totally wore a flower in her fancy-braided hair, but did mention Blackbook! Sawyer ended the segment sending them out of the spotlight to continue their adventure, but we bet we'll see them on the small screen again once Ann Curry comes callin'. (UPDATE: Here's a video of the two on GMA. AND Camille's journal was found!) 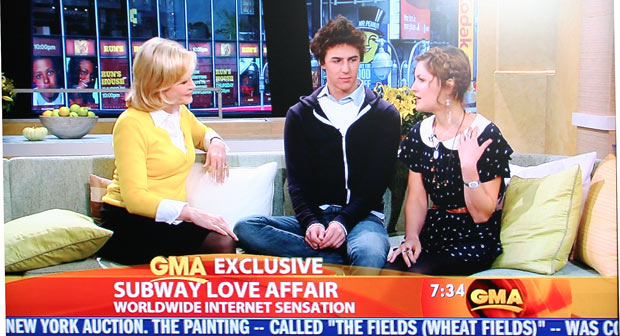 Before all of this morning television madness, a mere two days ago, Moberg said he wasn't going to speak further on his semi-precious subway sweetheart, so we asked Land Grant College Review's editors to finish up the lovebirds' story for us. Land Grant, for those who don't know, is a Brooklyn publication whose latest issue includes stories from Daniel Wallace (author of Big Fish) and artwork by Steve Keene (who has created album covers for bands like Pavement). Below is their dark take on the outcome of this story.

In front of the press, Patrick pops the question. They are always in front of the press, it seems. From their very first meeting in the coffee shop on Bedford, the press has been with them. With the flashbulbs going off he notices things about her face, the kind of things you can only notice about a face when it’s lit brightly for an instant. Later, in his bed alone, Patrick will try to forget them, he will try to remember her as she first appeared on the train, writing in her little book, the flower in her hair slightly wilted, which is what made it sweet.

(Continued after the jump...)

She says yes, as a matter of course.

The wedding is the media event of the year. There are flowers, of course, fields of flowers have been harvested for this, paid for by NBC, after a bidding war that at times was bitter and ugly. Camille’s PR person guided them through it so they were unscathed. Camille’s PR person is better than Patrick’s, but Patrick’s PR person is a nice man who wears woolen hats with his business suits when it’s cold outside, and Patrick does not want to let him go.

When the babies are born, the world holds its breath. They are premature. The doctor knows that the babies will be fine, but for the press conference he puts it on for the reporters, he makes a series of concerned faces. He says that the parents, Patrick and Camille, are staying strong. The doctor’s book about the ordeal, “Close Call,” debuts as a New York Times Bestseller. Camille reads the book, in her room, but Patrick, in his room down the hall, will not even turn it face-up.

Overseeing her line of accessories has exhausted Camille. She wants the twins to go to boarding school, in Europe. Patrick does not want this, but what can he do? “What could happen to them as long as there are always photographers around? It’s like constant babysitting,” Camille says. She doesn’t look up from the spreadsheets as she says all of this. She has told him recently that she does not like his mustache. Patrick wonders when she even noticed it. He goes to the bathroom and looks in the mirror. It really doesn’t look very good.

Their thirtieth rolls around and, as always, the world wants something of them. It wants to be reassured. It wants to know that Camille still wears flowers in her hair and that Patrick still looks down at the ground when the cameras are on. It wants to hear him say again, “When I saw her on that Brooklyn bound train, I just knew,” though what he wants to tell the world most of all is that he doesn’t remember what he thought he knew then and that now, he doesn’t know anything. They are going on national television. The network is doing a two-hour special, with actors recreating the best moments of their lives. At the end of the special the two of them will meet again on a soundstage dressed up to look like a subway car. For now Patrick is alone in their dressing room. The whole place reeks of Camille’s flowers, her goddamn flowers.