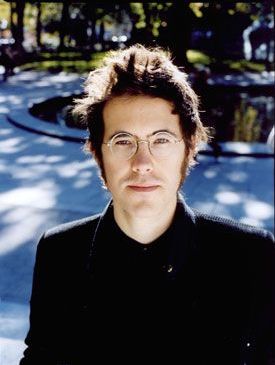 Singer-songwriter Elvis Perkins has steadily cultivated a loyal following with his warm and thoughtful catalog of tunes. Subdued but soulful, and sometimes swinging, Perkins's debut album Ash Wednesday won critical raves for what Pitchfork called his "ability to merge instrumentation and lyricism to create a romantic's sense of atmosphere." Rolling Stone's review observed a somewhat sombre tone in the album and attributed it to Perkins's unique and rather traumatic family history: His father, actor Anthony Perkins, died of AIDS when Elvis was seventeen, and his mother was killed on one of the planes on September 11th, 2001. There are threads of sadness woven throughout the album, but they're balanced by a modest buoyancy that's more pronounced when Perkins takes the stage. He'll do so Friday night at Bowery Ballroom, joined by his band Dearland. (Tickets.)

Where are you now? In Burlington on the way to the club. We’ve just come down from playing in Montreal and Toronto.

What venue are you playing tonight? Higher Ground.

Have you played there before? Yes, once before opening for Clap Your Hands Say Yeah in the big room. Tonight we’re in the smaller room and I have no idea what the turnout’s going to be. My drummer Nick knows but he’s not telling me.

Do you find yourself playing differently depending on the audience turnout? Sometimes I can feel a little ridiculous playing in front of a sad amount of people but that’s my own trip. Ideally you bring your best to every situation, even to a rehearsal when there’s no one around. But, you know, it can be demoralizing for us when there are not a lot of people there. And I project onto the audience that they feel awkward about having chosen to come to a show that not a lot of other people have. And I feel like maybe they feel insecure about their choice or something, that it’s not supported by a bunch of other people. But then I’m sure there are those who are happy to have something to themselves, that they can feel like they’re in on the ground floor for.

Exactly. Now that you’re getting more popular are you hearing, “Oh, I used to be into Elvis Perkins before anyone and now that he’s becoming a big deal I miss the old days.” I heard some funny story; a friend of mine walked in on his friend strumming some of my songs on his guitar and my friend said, “Oh, you know Elvis Perkins” and the guy playing guitar responded with, “You don’t know anything – you don’t know as much Elvis Perkins as I do.” So I guess there’s some of that going around but I’m not privy to most of it.

Some musicians talk about being affected by the crowd energy in different ways depending on how the audience is reacting. Is that part of your experience when playing live? Oh yeah, sure. I may have too much of a sense of that for my own good; I can’t always be sure I’m interpreting the energy correctly and I think I’m more prone to go down the dark end of the street than the sunny one. So if there’s any doubt with me I’ll generally believe the audience is not there and that the music is not making sense and that creates a weird vibe for everybody.

Can you tell us about a show where that’s happened recently? Hm. A show where that’s happened recently. [Perkins confers with his other band members and laughs.] My bass player says that Brussels fucking sucked and Nick reminds me that I thought Birmingham in England was weird, and it was. That gig was in a small dingy club and there was no backstage; our backstage was set up right in the room with everyone. So the audience could witness our sad pita and hummus and oranges and stuff, which they shouldn’t have to see. I think there’s some sense that the audience wants to witness something superhuman and when they arrive and find Doritos that they can then imagine fueling the set, it just makes for a strange energy. Our humanity had sort of been revealed beforehand and it made for a sort of strange energy onstage.

Were you surprised by the great reception Ash Wednesday’s gotten? Yes and no. In some ways I think I was more psychologically prepared for failure or for the album to be ignored. But at the same time if you put the time and energy into making something you’ve got to believe there’s something worthwhile in there, you know? So it’s nice. I think it’s probably the better end of the spectrum from being ignored.

What significance does Ash Wednesday have in the context of the album and your life? I decided to write the song on Ash Wednesday and it was a song like any other that just occurred to me as something worth writing and I did. It was only later that it became the fulcrum of the record. And later my friend and producer Ethan Gold suggested we name the record that and I didn’t have strong feelings about what it should be called so it made sense to me. But hopefully the songs stand on their own without being involved in anything too lofty or high-concept.

Your music was featured in an episode of The O.C., right? That’s true.

Have you been approached to license any of your songs for other advertising? [Laughs] Are you saying The O.C. itself is an advertisement?

Well, that wasn’t my intention but that’s not really far from the truth. It’s true.

I’m just wondering if you’ve had other offers come in. Well, I had a song in Fast Food Nation, which I didn’t see. But I was maybe more ideologically happy to see it there than in the O.C. But there are bills to pay everywhere. There was some soul searching involved in allowing that song to be used in that show, which you know I had never really watched before and I know comes with a certain set of associations and maybe even stigmas. But to answer your question, no I haven’t really been approached from too many people who are wanting to sell anything using my music.

You brother Osgood is an actor, as was your father. Have you dabbled in acting at all? Not really. The most I’ve done is playing Man with Guitar in a high school production of The Grapes of Wrath. My brother and I had a bit of division of labor in the family so that side of things was more his and the music was more mine. But it’s out there, certainly, as a concept and it’s something I might explore at some point.

Do you feel that the media’s fixation on your biography sometimes detracts from the writing about your music? Yes.

But at the same time, your music seems to draw on specific personal experiences as well. It’s true. Yeah, it’s a tricky thing there. Yeah, I don’t know if there is any way around it. Even if I got on the phone with you today and said, “Okay, listen, man, don’t say a word to me about my history", it’s still fair game for you or any journalist to write about it. And I understand that it’s print worthy information, the stuff I didn’t have anything to do with. So you know it’s always been a challenge for me to identify myself and locate my sense of self when there’s all this information that precedes me. And it continues to be a challenge now that I have something that is my own but that is still constantly lassoed to the familial stuff.

When I’m interviewing people I usually feel that their personal lives are not very relevant or even interesting but in your case it seems that Ash Wednesday is an album that was fueled by your personal experiences. Is that accurate or am I just parroting received wisdom at this point? It’s accurate but by now it seems it’s almost been taken over by the media to the point where it seems like it belongs more to the media than to me. Maybe that’s a mechanism of self-preservation or something that I’ve adopted. I’ve sort of grown wary and weary of speaking of it because it’s sort of overdone at this point. I don’t want to be a broken record or have my record be a broken record by information that’s on the one hand relevant. But it’s sort of taken on a life of it’s own at this point and the more it’s mentioned the less relevant it seems to me.

Do you live in New York? Sometimes. I don’t really have a home at the moment. I had one before this long touring began and then the lease ran out when we were on the road and there hasn’t been much time off. So I haven’t really claimed a new space. I’m a bit of a drifter at this point. It’s sort of a cliché but it has happened to me.

What's the most memorable encounter with a fan you've had so far? A young girl in Montreal, not our most recent show but the last time we were there. After the show I had gone to the merchandise table and was seeing how it was going and this girl came up to me to thank me for the record because before it came out she said she had been experiencing some palpable void in her consciousness or something and she didn’t know what it was about. And when the record showed up she felt it was the exact positive to fill in the negative she was experiencing. And that gave me the chills. I thought it was pretty major.