Eleven Unique NYC Experiences That Deserve Their Own German Expressions

There are only a few fundamental truths about living in New York City: You will develop a love/hate relationship with the subway. Every bar and restaurant you love will eventually turn into a bank, chain pharmacy or vacant greed hole. You will never learn to play guitar from Dan Smith. And most importantly, the many things that make this city so frustrating and difficult will be the things that most endear you to it.

No matter your background, what part of the city you live in, or how long your commute is, the NYC experience is a perpetual Rube Goldberg machine filled with strange and unique situations that the English language struggles to fully describe. Thankfully, there is another language that IS very good at describing extremely specific things: German.

From schadenfreude to kummerspeck, from doppelgänger to zeitgeist, German compound words capture the essence of these difficult-to-describe emotions and scenarios with verbal efficiency (not to mention linguistic zest). Inspired by former LAist Editor-in-Chief Julia Wick, we've compiled our own list of NYC experiences that deserve their own German expressions.

Verpassterzug: The Agonizing Feeling Of JUST Missing The Subway

There is no quintessential NYC experience quite like this: running down a subway station platform with your arms flapping all about like a distressed penguin, making eye contact with the conductor, and then hesitantly stretching out your hand to try to slip between the doors before they close. For every time they re-open, they're just as likely to slam shut in your face, leaving you gazing at your own woebegone reflection in the greasy window as the train rolls away forever.

Konversationkleinangst: The Fear Of Unexpectedly Running Into A Work Colleague Or College/High School Acquaintance On The Train And Having To Make Small Talk For An Indeterminate Amount Of Time

While outlawing conversation altogether on the subway may seem a bit extra to some (if you vote for me for mayor, I will make this the cornerstone of my administration), few things fill us with dread quite like making accidental eye contact with someone on the train, quickly piecing together that you know this person from somewhere, and then watching helplessly as they approach. You have no place to run, so just curl up into an awkward shell of stilted updates on weddings, Kardashian babies and sportsball news. 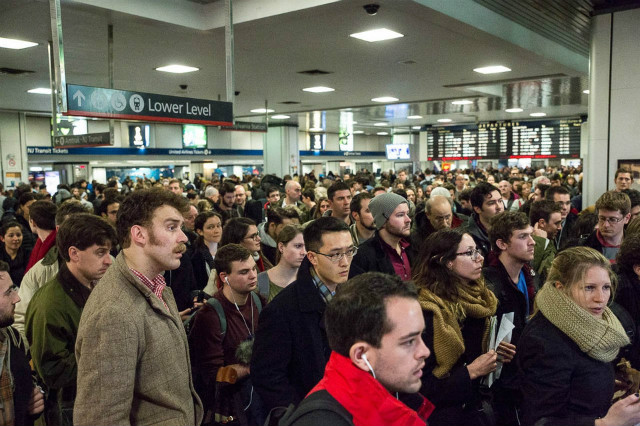 Vorfreudësatan: The Horrible Anticipation Of Having To Go To Penn Station On The Eve Of Some National Holiday

Penn Station has it all: massive delays. Heavy sighs. Strange smells. Lines. Drunken commuters. Heavily processed air. Bodies, sweaty and disconsolate, pressing up against each other. Mouth breathers breathing down your back. You may also get a whiff of this anticipatory anxiety when traveling to Penn Station on a Friday afternoon, or a Monday morning, or literally any day of the year. This is also applicable to gearing yourself up to go to JFK, LGA, Newark, any museum on a Saturday, Times Square, visiting relatives on the Upper East Side, and of course, taking a trip with your loved ones to the Swedish-founded, Dutch-based, Brooklyn-located IKEA. 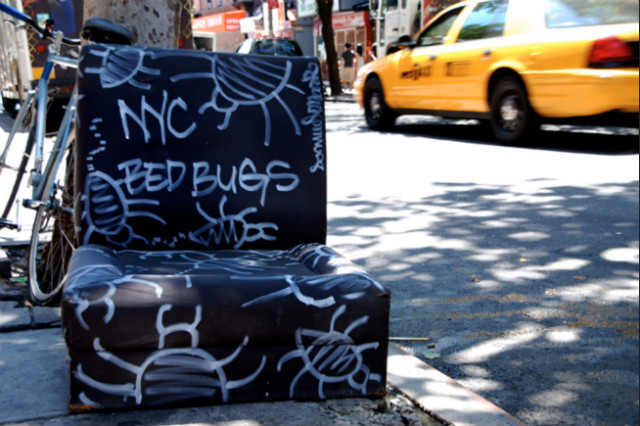 Not all mattress spell it out like this (thekateblack/flickr)

Bettwanzengrusel: The Panic That Seizes Your Body When You See An Uncovered Mattress On The Sidewalk And All That It Implies

I won't even let my dog sniff those things for fear of the bugs-who-lay-in-beds. Bedbugs can ruin your social life whether or not you're already prone to high levels of urban anxiety. So this also applies to learning your local movie theater, gym or favorite restaurant recently fumigated under shadowy circumstances. And when it comes to entire subway trains being put out of service because of bedbugs, please make it Uberbettwanzengrusel.

Wohnunglück: The Sadness That Takes Root In Your Bones Upon Seeing Other People's Superior Apartments

These apartments tend to be significantly nicer or better-placed than your own. Things like: more than one room, more than one window (a window that doesn't face a brick wall?!), doormen, elevators, and egads, multiple bathrooms. There is no monster quite like the friend who directs you to use the guest bathroom.

Brünchangstungh: The Anxiety You Feel When You're Walking Up To A Popular Brunch Destination And Another Couple Is Approaching The Entrance At A Pace That Will Deliver Them There Slightly Ahead Of You, Snagging The Very Last Two-Top

You will be left waiting at least half an hour (or more), which is at least an hour in hangover time. Related: Laneliniegrrrr, the feeling you get when you have a great night planned out and you arrive at a restaurant and there's a two hour wait, and you immediately leave because there is no point of ever waiting on a line in NYC. 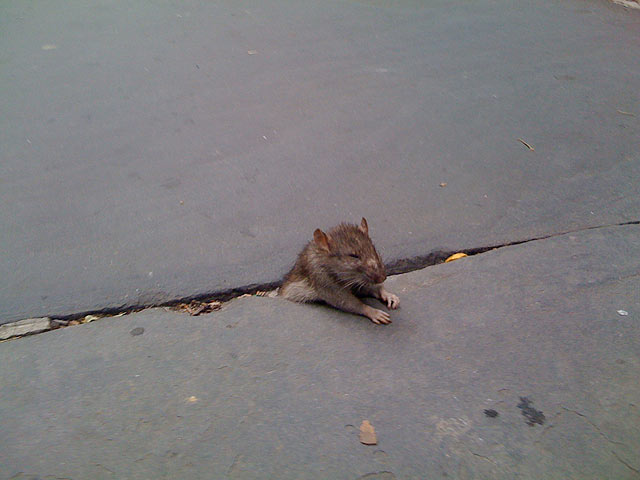 Oh sure, they look cute when they're just hanging out in the sidewalk... (Tipster Wayne took the original photo)

Karosserierattenpanik: The Belief That The Rats Will Eventually Team-Up To Take You Out

It's after midnight, and you're buzzed off surviving another day in the five boroughs in which you were not beaten down by your commute, your boss, your roommates, or that tiger-sized raccoon you read about. You turn a corner and find yourself walking along an unfamiliar empty street. The street lights are all out. You feel your shirt starting to stick to your back in the evening humidity. You hear the tell-tale sound of little nails scurrying around you. What was that blurry image in the corner of your eye? You start walking a little quicker. You can hear yourself breathing audibly now. More nail sounds, more blurs. But no one's around. You're about to turn another corner... and in front of you stands a collective of rats. They're united in purpose, their movements in sync. Their teeth chatter in unison as if they just emerged from the Polar Bear Plunge. It dawns on you... they want you alive. Slowly, then quickly, they come upon you, climbing your body, taking control of your movements like a marionette. This is a very rational fear.

It takes some trial-and-error to make sure that your daily commute is as efficient as possible, but once you unlock the secrets of your train, chef's kiss. The other subway experience that comes close to matching this is when the express and local trains line up so you can waltz from one to the other with no problems.

Geschlossenschuld: The Guilt That Washes Over You When An Out-Of-Towner Asks You About Cool NYC Cultural Institutions & Events And You Have No Idea What They're Talking About

And then you realize you've just been sitting in your apartment ordering Seamless, bingewatching Law & Order reruns and avoiding social engagements for the last two years. And the sickest thing is... you prefer it this way.

jake gyllenhaal using the subway is an entire cinematic universe by itself pic.twitter.com/xS2JOUCC6p

Berühmtheit Gleichgültigkeit: When You Spot A Celebrity And Act Totally Indifferent (But Brag About It Later)

Whether you spot Jake Gyllenhaal eating a bagel off the floor of the subway or Paul Giamatti practicing his faces, NYers tend to act completely indifferent—almost hostile—in person toward celebrities. Our instinct is to chide Michael Cera for bad subway form, not to awkwardly ask him for a selfie. But then, of course, we will go and tell everyone we know about our run-in. It's the feeling of excitement over brushing shoulders with celebrities while also tempering that excitement in an attempt to not seem uncool, but then unleashing that excitement upon loved ones and friends—almost like an excitement sandwich.

I feel like this one is very self-explanatory, but just in case: it's the fear you experience when you decide to move a large piece of furniture or kitchen appliance (say, a fridge or couch or stove) in your apartment, one which has not been moved in years, and you're terrified of what you will find. The corollary to this is Freundbewegtangst: the paralyzing anxiety of knowing your friend/relative is moving and they could ask you for help doing so any minute now.

#difficult expressions
#german words
#original
Do you know the scoop? Comment below or Send us a Tip