The final day of the Electric Zoo music festival has been cancelled after two deaths and other illnesses—apparently from MDMA (molly). The Mayor's office issued a statement, "The City recommended cancellation and the event promoters have agreed."

The statement explained, "During the first two days of the Electric Zoo music festival, two concert-goers have died and at least four others became critically ill and have been placed in intensive care at area hospitals. Definitive causes of death have not yet been determined, however, both appear to have involved the drug MDMA (ecstasy, or molly). The Electric Zoo organizers have worked with City officials to reduce health risks at this event, but in view of these occurrences, the safest course is to cancel the remaining day of the event."

The three-day festival draws tens of thousands of electronic music fans each year. Last year's festival reportedly had over 100,000 attendees.

Electric Zoo hasn't updated its Twitter or Facebook yet. Last year, at the "Haunted Coliseum" electronic dance music concert at the Nassau Coliseum, dozens were sick from ecstasy/molly and/or alcohol.

The victims were from out of town: The NY Daily News reports, "Jeffrey Russ, 23, of Rochester, was rushed to Harlem Hospital at 3:10 a.m. Saturday but could not be saved. Olivia Rotundo, 20, of Providence, R.I., was taken to Metropolitan Hospital at 8:45 p.m. Saturday and died about 50 minutes later, police said."

Update, 10:37 a.m.: The Electric Zoo has now changed to say, "The founders of Electric Zoo send our deepest condolences to the families of the two people who passed away this weekend. Because there is nothing more important to us than our patrons, we have decided in consultation with the New York City Parks Department that there will be no show today." 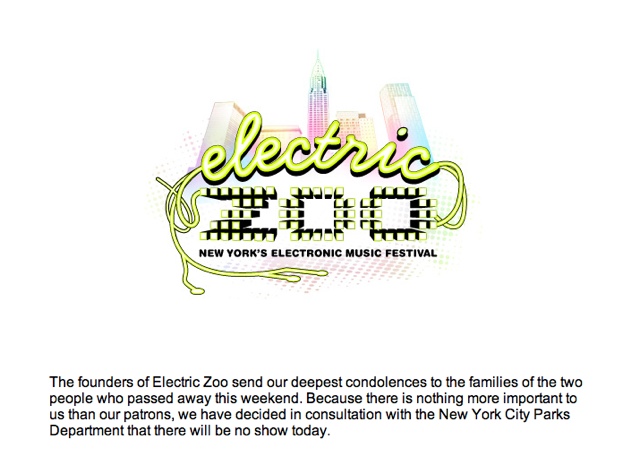