Election Night: Where to Watch 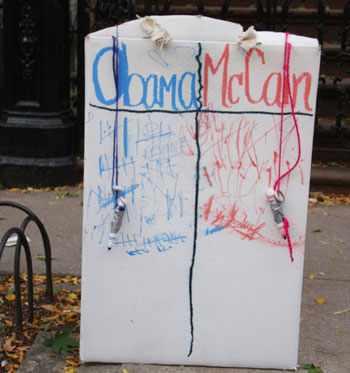 Tonight, while you're at home baking your Yes We Cake, you may wonder where you'll be able to enjoy it tomorrow. We've got you covered with some restaurants, bars, venues and parties where you can watch the results come in.

Photo of Gramercy Park kid's voting board via AnimalNYC.

OUTDOORS: It's supposed to be warmer than usual tomorrow, so it might be fun to go old school and watch the results of this epic election in epic Times Square. CNN Worldwide will host a viewing party from noon to midnight in the newly renovated Duffy Square, and spectators can see the results in Spectacolor high-definition at the corner of 47th Street and Broadway. ABC, Fox and Reuters will also be broadcasting on giant screens, and from 10 p.m. to 11 p.m., MTV will show Comedy Central's Indecision show. — John Del Signore

PARTY: The folks at Brooklyn Based, MyOpenBar and The Bell House are hosting a Red + Blue Election Night Party. Who's gonna be there? "The Red Hook Vendors, for one. The ball fields may be closed for the season, but Rafael Soler (finalist at this year’s Vendy Awards), Fernando Martinez and Eleazar Perez will all be there selling pupusas, tacos and huaraches. On the other side of the spectrum, The Blue Album Group will be performing Weezer’s celebratory “Blue Album,” start to finish. And we’ll be representing the party colors ourselves with homemade, Red and Blue cupcakes." $4 candidate-themed cocktails will be poured all night: "Drambuie Rusty Nails (a nod to McCain, of course) and a Hendrick’s “GIN-eration Tonic” (to toast Obama’s renewing effect on the state of the union)." And as if that wasn't enough, Eugene Mirman will be emceeing.

VOLUNTEER: If you're an Obama supporter and feel like you can still do more to help his campaign, head over to Last Call for Change, the largest ever-attempted phone bank effort in New York's history! Bring your friends, cell phone and charger and prepare to chat up the undecided folks in the battleground states. More details here. No word on any McCain phonebank events, but you can rule out any calls coming from NY's Young Republicans, as their phone is still disconnected.

BARS: If you want to have a drink in front of you while watching the results get tallied, there are innumerable of options. SideBAR and the Village Pourhouse are both hosting election day parties...complete with presidential and vice presidential look-a-likes who will pose for pictures with attendees. Obama Mamas and Macallan McCains will be served and an $11.04 Red, White & Blue menu will be available. Bonus: red and blue beer will be poured.

EVENT: If you want a laugh to help cope with the unbearable anxiety, here's one option: "Hundreds of young New York City progressives will come together to watch the election results this year at an event hosted by Living Liberally, American Civil Liberties Union Young Professionals and the Planned Parenthood Activist Council. The event will take place at Comix, and includes food and drink specials, free admission and plenty of election coverage." RSVP here.

ANOTHER EVENT: "Come spend the excitement of a historic Election Night at the most historically civic museum in New York City. The City Reliquary Museum and Civic Organization will be hosting an Election Party. Amid red white and blue bunting and streamers we will have two separate projectors will be live-broadcasting the State-by-State Roll Calls, on both indoor and outdoor screens." Burgers, dogs, veggie dogs will all be offered at special recession prices; Obamashots, beer and soda will be poured; and they ask you BYO American Flag!

CELEBRATION: Galapagos invites you to spend the election night amongst friends, strangers and the Yes We Can!-Can Girls at their 'Where were you when Obama was elected?' party. It will include big screen projected results and coverage, a Presidential kissing booth, and bonuses like: Santa Claus and doctor's notes so you can go to work late the next morning! And if Obama wins, Cosmos are on the house.

PARTY: The group Democratic Leadership for the 21st Century says they're hosting the city's largest election night party at New World Stages. It's only $5, and they say they've got 20,000 square feet to celebrate/despair in, with thee 15-ft projection TVs, dozens of plasma screens, three top-shelf bars, and—this is unique—a theater within the venue, where you can watch the returns in a "quiet room" with full sound. — John Del Signore

ANOTHER PARTY!: Public Assembly invites one and all to their Obama Said Knock You Out election night blowout. Live coverage, 2-for-1 happy hour, FREE Fried Chicken and Waffles from Jimmy's Diner, Olde English open bar and more! Get all the details here.