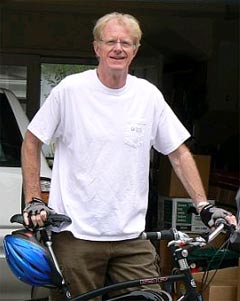 At this point, it's hard to tell whether Ed Begley, Jr. is more famous for his decades of acting or his decades of environmentalism. Sure, he's logged over 200 appearances on stage, film and television, including his Emmy-winning breakout role on St. Elsewhere and his priceless turn on Arrested Development. But his funniest performance is arguably his self-effacing cameo as a hardcore green activist in the classic 1999 Simpsons episode "Homer to the Max", in which he's shown driving a nonpolluting go-cart powered by his "own sense of self-satisfaction." Off screen, he's embraced this role of ardent environmentalist with an infectious positivity and seemingly tireless commitment to reducing his own impact on an increasingly injured ecosystem. The many green improvements to his largely solar powered, energy efficient home have been documented in the amusing and informative reality show Living With Ed, and now a newly published book offers a wide range of changes readers can implement to make their lifestyles more sustainable. Called Living Like Ed, it's as inspiring as it is handy, and Begley will be at the Strand bookstore at 7pm tonight for a reading and book signing organized by Environmental Defense.

Is your book manufactured in any way to make it more green? Yes, it’s on 100% post-consumer recycled paper.

Did you deliberately choose a non-chain bookstore in New York to do your signing? We’ll be doing some signing at chains but it did appeal to me to do it at The Strand; it’s a bookstore with a great reputation. It’s a mix. We’ll be doing Book Soup in L.A. but also Barnes and Noble elsewhere on the book tour.

How do you reconcile the carbon emissions caused by touring with your environmentally-conscious lifestyle? It’s been a challenge because when I’m traveling cross-country I usually take my wife’s Prius. Around L.A. I take my electric car. I drove the Prius to Florida few months ago but with this schedule on this tour I had to get on the plane, which is very hard for me. But I bought a TerraPass and tried to mitigate. You make choices and ask yourself: “What’s better? Am I going to stay home or promote this book?” I guess I chose right but they’re tough decisions.

Yeah, I guess there’s no way to completely extricate yourself from civilization if you want to participate and make a difference. For years in the ‘90s I did not fly. I would take Greyhound or Amtrak. Both burn fossil fuels but with Amtrak you get really good mileage with diesel fuel, which still pollutes, of course. And with Greyhound I watched the guys fill it up and I calculated that we were getting insanely high mileage; we were getting 400 miles a tank in the '90s when I would take Greyhound a lot. The Prius has very low emissions; it’s simply better than flying and burning kerosene at 30,000 feet, which is what jet fuel is. In this case I came by plane and did what I think is for the greater good. Time will tell if I made the right choice.

Speaking of your wife Rachelle, how has she influenced your attempts to make your home environmentally friendly? It’s been a real challenge; I won’t lie to you and she knows this. When I was single I used $100 of grid power in a year. Other things have changed other than my marriage to her: I run a business on site, Begley’s Best, she has her Pilates business upstairs, we have a camera crew at our house all the time, I have a much bigger electric car, I have an eight year old in the house all the time and a lot more laundry. When I was single I would have it at 68 in the winter and 78 in the summer and I was fine. Those temperatures don’t fly anymore with Rachelle. So I want to be a good husband as well as a good steward. Because of that I’ve used more energy than I did.

So I signed up for the Green Power for Green L.A. program but I’m buying much more than $100 a year in power to supplement the solar. But I also have belt and suspenders; I buy the green power from the city of L.A. and I also buy a Terra Pass for all my home energy use. Actually, two belts and suspenders – I bought a share in a wind farm in 1985 so I put out ten homes worth of green power into that very same grid every day. So I guess that’s how I sleep nights about my green energy use. But I’m making major changes in my house at the moment with another level of energy efficiency. I have a new A.O. Smith water heater that’s 95% efficient. The insulation I installed in this 1938 house when I moved in wasn’t checked with an infrared gun and there are many gaps that we didn’t see. I calculate that in a month I will be using a quarter of the green power I’m taking off the grid. I think Rachelle will be comfortable and I think I will have greatly reduced energy bills.

What are some home improvements you can suggest for residents of concentrated urban areas like New York? What about composting; you do that right?
I do; I composted even when I lived in an apartment building. I met a woman named Liz last night at a great show called Shoot the Messenger and she lives in a 300 square foot New York apartment and composts. She wanted to know how she could do better and I said, “Honey, I’m humbled to be in our presence! You’re beyond me. You have a much lower carbon footprint than I do with my solar panels and everything!” As you surely know, the density of New York dwellings allows for great energy efficiency, and I’m humbled by what so many people are doing in this city with buying locally and composting. It’s really extraordinary and gives me hope.

Do you have an opinion on Bloomberg’s PlanNYC, which would implement congestion pricing like they have in London? Yes, I think that’s a good idea. Any tool we can use to make this a greener city is good. I’m always very careful that these things don’t affect the working poor and people at the poverty level; I think we need to be very sensitive of that. But I think we need to have congestion pricing and more bike lanes, which I’m glad to see going up in New York. I think we need to get people out of their cars and the hybrid taxi is a good step in the right direction.

Your book seems optimistic about the future of civilization. I am optimistic because of the things we’ve already done. Since 1978 we have four times the amount of cars in L.A., yet we have half the pollution. We should get a medal for having climbed up the mountain halfway. We need to continue to climb and really clean up the air in L.A. and Houston and Bakersfield and everywhere. The hole in the ozone layer was so large but we got serious about it and it’s gotten smaller. The Hudson River was so polluted in the ‘60s but it’s now a productive waterway again.

Now, this doesn’t mean we’re not going to have some serious consequences if we don’t act quickly on things like global climate change and make sure we have fresh water that is not polluted with toxic chemicals and that there’s enough water to go around and that we don’t keep building developments when there’s not sufficient water, or places to put the sewage and garbage. I think we need to be optimistic but I don’t paint so rosy a picture that everything will be fine if we all just buy better light bulbs. That’s not enough.

There are a lot of progressive people in New York who have switched to energy efficient light bulbs and more people are starting to compost and commute by bike. What other steps can people take who have already made these changes? Buy locally. This time of year it’s not as easy as it is in California but when possible do so, and join a community garden. Join a group that is getting active in promoting better transportation or cleaning up the air – local groups that are working in New York.

If you need to buy a new appliance make sure it has the highest Energy Star rating. Unplug things. Put non-essential power on a power strip and switch it off when you’re not around. If you don’t want multiple power strips around you can get something called a Green Switch, which is a new wireless technology that turns the power off at the outlet. You can even have the bottom half of the outlet be your clock radio or the fax machine you want on all the time and the top can be the green switch that can shut off when you walk out the door. You can save maybe 2 or 3 kilowatt hours a day on something like that with all vampire power used by the instant-on TV and things like that.

On the national level there is a very tight Democratic primary race now. Have you endorsed either of the Democratic candidates? Dennis Kucinich was the boldest of all but he never polled at the numbers we hoped he would poll at. I was supporting John Edwards, who had the best stance on nuclear power and coal plants. Obama and Hillary both have good environmental records but I’m supporting Obama at this point. I have known Hillary since she was the first lady of Arkansas and I will support her if she wins the nomination. But even John McCain, who had an 11 out of 100 voting record by the League of Conservation Voters in 1999 now was a 56. So people are starting to get it, even John McCain. So it’s something that’s going to be dealt with by whoever the elected one is.

Have you ever turned down a project because it conflicted with your environmental efforts? I turned down some jobs in the early ‘90s when I didn’t fly at all, such as a job in Europe. I also turned down many projects not because they were environmentally unsound but because of violence against women or content I didn’t want to be a part of. I’ve just tried to have a conscience about the projects that I choose and I think I’ve had a pretty good record at that. According to my agents I lost a great deal of work in the ‘90s because people were just scared to hire me; they thought I was going to throw a fit on the set if someone accidentally walked in with a Styrofoam cup. People would come up to me on the set saying, “I’m so sorry! We’re going to have it taken care of by lunch, please forgive me!” And I’d say, “What are you talking about?” And they’d say, “We don’t have a recycling bin set up, we’ll have it by lunch, I swear!” [Laughs.]