From the House of Yes's Christmas Spectacular. (Photo by Tod Seelie) 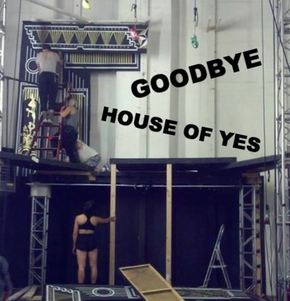 Long gone is the era that anyone could just lease out a warehouse in non-residential East Williamsburg, build a stage, sell cheap beers, book some bands, and hardly worry about such things as paperwork. These kind of illegal, DIY venues have mostly all become legal at this point, and if they haven't, The Man will come calling eventually. That's what happened at the House of Yes over the weekend.

The people behind the shuttered venue—who are known for their over the top parties—sent out an email this morning regarding their closing ("We are closing our space with open hearts, packing up a five-year passion project fueled")... but this closing was planned. The NYPD just happened to come knocking on one of their final nights in the space.

They've been actively seeking a new space in the area ("4,000-7,000 square feet with over 25 feet of ceilings at market rate or lower"), and promise great new things to come... maybe even great, legal things? We've reached out the organizers for a comment on their future plans, as well as Saturday's bust, and will update if we hear back.

Update: Anya of House Of Yes told us this morning that their Friday night variety show ended at 10 p.m., "and then we rented the space out for a private event afterwards as we often do. There was some sort of a police altercation which we still don't know much about, but some people were apparently detained."