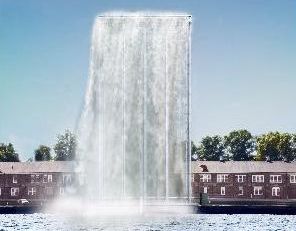 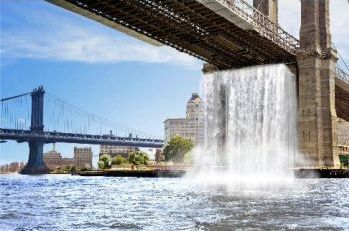 Computer rendering of the waterfalls by the Public Art Fund.

Details have emerged on the ambitious, $15 million East River waterfalls project coming to New York in mid-July to cap off the Olafur Eliasson retrospective at MoMa. The project will consist of four man-made waterfalls, ranging 90 to 120-foot tall, installed temporarily at four sites along the shores of Brooklyn, Manhattan, and Governors Island: by the Brooklyn anchorage of the Brooklyn Bridge, between Piers 4 and 5 in Brooklyn, in Lower Manhattan at Pier 35, and on the north shore of Governors Island. The waterworks will flow from 7am to 10pm seven days a week, will be lit after sunset, and operate from July to October.

Anticipating a backlash from environmentalists, the city was quick to promise that the project will not harm any aquatic life in the East River. Fish like Blinky and other life forms will be protected by filtering the water through intake pools suspended in the river. A lawyer for the environmental group Riverkeeper tells the Sun that after consulting with the city, he's persuaded that the project will be fish friendly: “The amount of water being withdrawn is fairly minimal, and even considering the low levels of withdrawal, they've taken a fairly aggressive approach to mitigate the impact.” 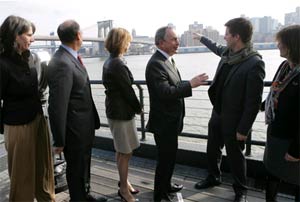 To be energy efficient, project organizers have pledged to use pumps powered by the East River’s tidal water current and utilize low-impact lighting such as the LEDs used for the new New Year’s Ever ball. They’ll also tithe the guilt away by buying carbon offsets to neutralize the project's emissions.

The waterfalls are being financed privately and implemented by The Public Art Fund but, judging from the revenue brought in by The Gates, the Mayor’s office is guesstimating $55 million in economic benefit for the city. Mayor Bloomberg said, "These waterfalls will be just as awe-inspiring as any found in nature. They really must be seen to be believed."

There is a website but the information isn’t flowing on it yet; at this point it’s just a url-holder telling visitors to check back “in a New York minute.” We have some more details and a map after the jump. 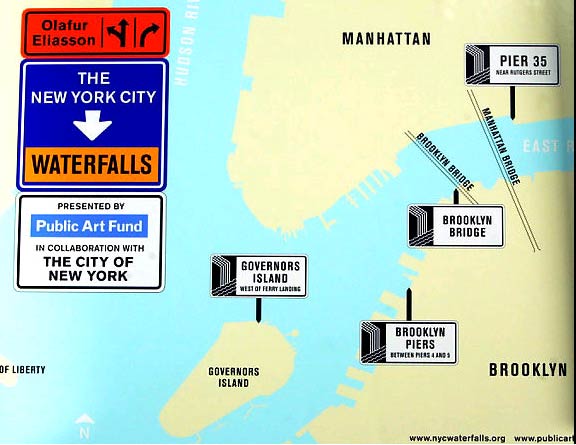