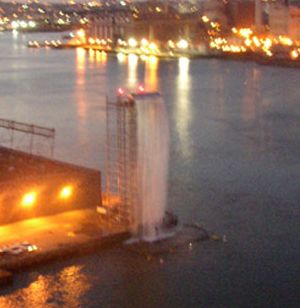 Delayed spoiler alert: This photo reveals what the upcoming East River waterfalls will most likely look like. Although artist Olafur Eliasson’s ambitious art project doesn't officially start until June 26th, apparently they do need practice turning the spigot. One eagle-eyed Curbed reader caught them in the act late last night and snapped this photo, which depicts the waterfall at Pier 35 by the Manhattan Bridge.

Now some may be inclined to look at the photo and wonder how the hell the bill comes to 15 million dollars (paid for by private donors), but remember there are three other waterfalls in addition to this one. And besides, you'll really need to get up close to get the full effect; just imagine how it's going to feel when your boat tour drifts so close to the roaring spray that your hair gets christened with East River mist. That's grandeur. (Tour prices range from free to $50,000.) The only important question, really, is whether visitors will be able buy souvenir gag photos of themselves going over the falls in a barrel.

Read more about the project, which lasts from June 26th to October 13th, here and here, and New York has a feature on Eliasson this week, too. If you catch any premature waterfall evaluations, tag your Flickr photos "Gothamist" or send them to tips(at)gothamist(dot)com.