"I was so much older then/I'm younger than that now." We'll be celebrating Bob Dylan's 71st birthday with a series of posts this week. As mercurial as Dylan has always been, there is one thing we do know: for as long as Dylan has been writing songs, he has been writing to, for and about New York City. So far, we've listed our favorite Dylan covers, looked at the Freewheelin' album cover art, and explored songs written about Robert Zimmerman. Now from our archives: how Dylan was depicted in comic books.

Bob Dylan hasn't just been an inspiration to other musicians—there are movies based on his songs, directors who have spent years exploring his work, and esteemed writers such as Allen Ginsberg, Joyce Carol Oates, Rick Moody, and Barry Hannah who have cited him as an influence—and then there are the copious comic book references. Because where else are you going to find a freelance special ops enforcer named "Kwinn" the Eskimo, pigeons putting up their lighters to "Just Like A Woman," and Catwoman quoting "Like A Rolling Stone"? 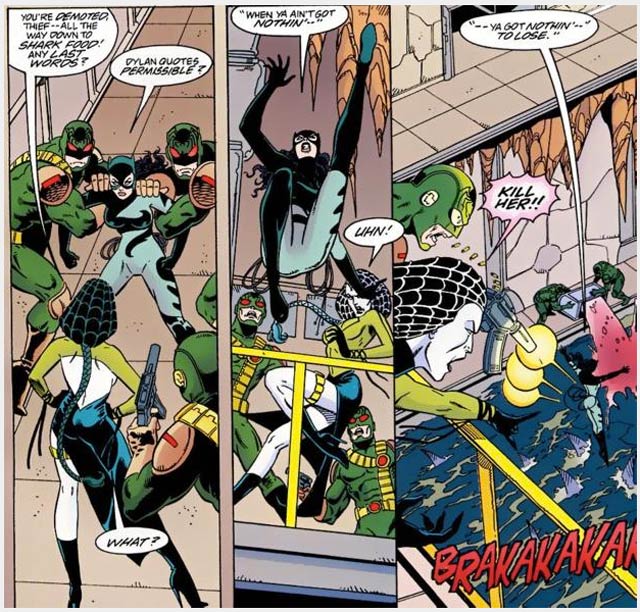 Yep, comic book writers love referencing Dylan with lines of dialogue, sight gags, and especially, titles. They get to play around with a lot of bizarre and random occurrences: did you know that Batman once stopped by to listen to Dylan (with Joan Baez by his side) play "Visions of Johanna"? We're also pretty sure the world has yet to hear Dylan's lost classic, "Protest Songs For Migrant Garbageman." There are plenty of outright humorous appearances: National Lampoon had their "Ventures of Zimmerman", along with its sequel, "Son-O-God Meets Zimmerman"—although both seem oddly heavy on the Jewish imagery. Mad Magazine also likes to make fun of him: one comic reads, "over the course of his career, Bob Dylan has filled his harmonicas with 674 gallons of spit." 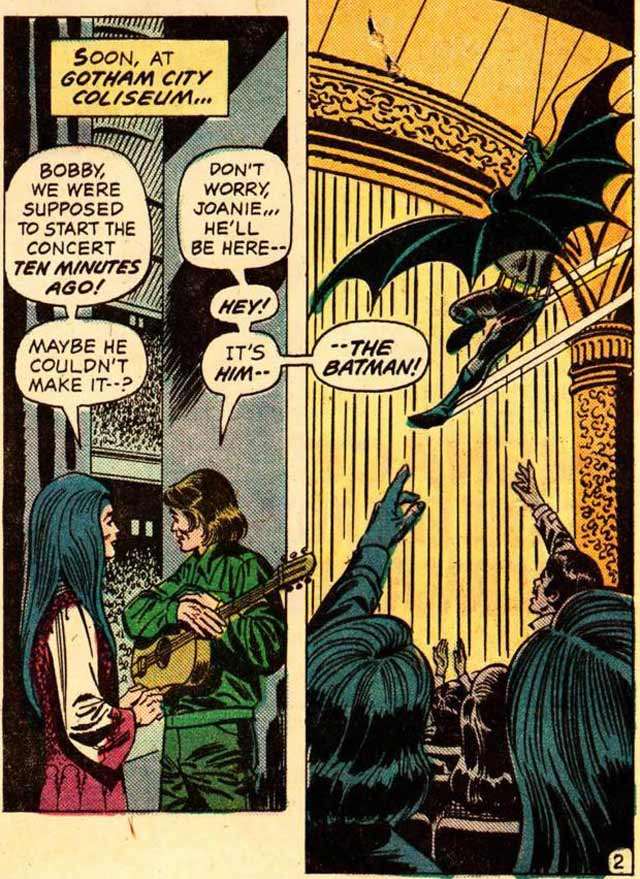 Oddly, Batman dropped by to see Dylan and Baez play in Superman #279

Comic Book Resources decided to honor the former Lucky/Boo Wilbury last year by compiling 70 comic book appearances and references. The two favorite songs of comic writers seem to be "All Along The Watchtower" and "The Times They Are A-Changin'." Alan Moore is a particularly avid Dylanphile: the lyrics and imagery of "Watchtower" and "Desolation Row" served as ongoing themes throughout the 12-part classic Watchmen. 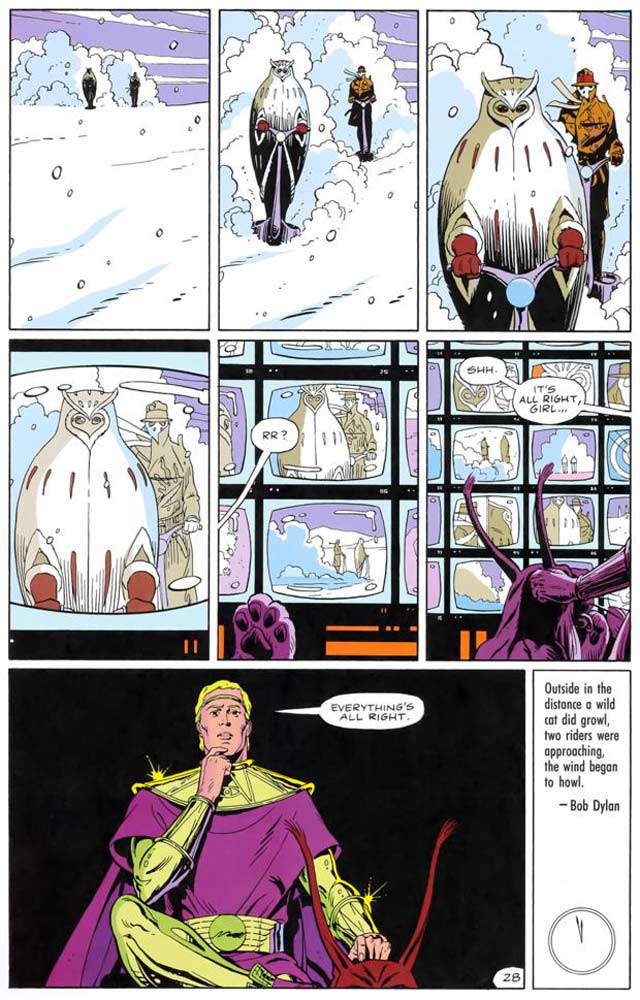 Other songs referenced throughout comic bookdom include: "This Wheel's on Fire", "Quinn The Eskimo," "Simple Twist of Fate," "Hard Rain's a-Gonna Fall," "Like A Rolling Stone," "Positively 4th Street," "Knockin' On Heaven's Door," "Forever Young," "Masters of War," "Gates of Eden," "I Shall Be Released," "It Ain't Me Babe," "Song For Woody," "Just Like a Woman," "Dirge" and "Shelter From The Storm." How could the writers forget classics such as "Wigwam," "Wiggle Wiggle" and "If Dogs Run Free"?

Dylan has only made one overt references to comics in The Basement Tapes classic, "Yea! Heavy And A Bottle Of Bread," which is all about Dylan and his comic book...catching a trout...with a nose full of pus.

You can browse through some of our favorite comic references above. And below, checkout a classic Peanuts strip from forty-one years ago:

#bob dylan
#bob dylan week
#comic books
#dylan week
#Music
#rock
Do you know the scoop? Comment below or Send us a Tip