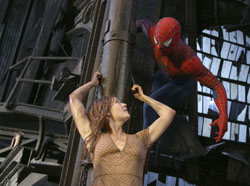 All the papers are asking where Spider-Man was when Mary Jane Watson Kirstin Dunst's belongings were burgled on August 9th. The actress, who was in town filming How to Lose Friends and Alienate People, was staying at the SoHo Grand Hotel and had just left her suite with some others before the crime took place. What was in her room was a $13,000 handbag, $2500 in cash, ID and credit cards, two digital cameras, a cell phone and an iPod.

A surveillance camera caught the two crooks after their caper and a suspect, 33 year old Jarrod Beinerman, is now being held on $50,000 bail. He was arrested after going to a Brooklyn court for an unrelated earlier this week, just as Dunst was wrapping up filming. His lawyer claims he isn't carrying anything in the surveillance video and that his client was only in the hotel because he heard a movie was being filmed and "went there to check out what was going on."

Let's assume that Beinerman (who has a long criminal record that includes two federal drug convictions, helping run a cocaine-distribution ring and possessing narcotics in prison) did it. The Post says he got in to the room by taking a guest elevator to the floor below Dunst's suite and then a freight elevator up to the penthouse level, where he found the door was (duhn-duhn-dunst) open! Someone is so getting fired for that one.

UPDATE: Beinerman has changed his MySpace status to "worried". However, he has left his layout, which features bundles of money and marijuana graphics, the same. And ladies...he's single!