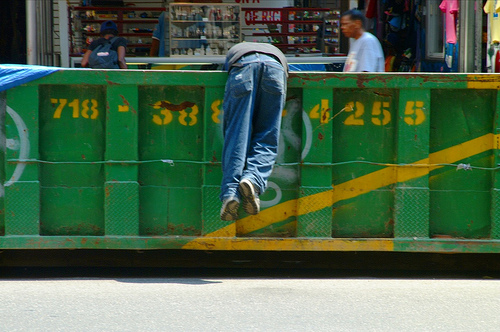 A lot of people pick up abandoned furniture on the street, but apparently there's some good 'ol fashion dumpter diving going on around town, too. Treasures in the trash are hard to come by, and we'd be nervous about bed bugs, but for the fearless - there is free stuff for the taking. The best of which is found at Third Avenue and 12th Street as NYU students depart for the summer.

The NY Times chronicles the crucial hours as a group gathered to go through discarded items of the undergrads.

New York has several colleges and universities, of course, but according to Janet Kalish, a Queens resident who was there that night, N.Y.U.’s affluent student body makes for unusually profitable Dumpster diving. So perhaps it wasn’t surprising that the gathering at the Third Avenue North trash bin quickly took on a giddy shopping-spree air, as members of the group came up with one first-class find after another.

What was found? A television, a painting of a Mediterranean harbor, and a working iPod! Though some find excitment in the little things, “The small thrills are when you see the contents of someone’s desk and find a book of stamps,” a woman told The Times as she "stood knee deep in the trash bin examining a plastic toiletries holder." Where did this group find out about the free spree? Freegan.info, a site run by a group that boycotts "the economic system where the profit motive has eclipsed ethical considerations and where massively complex systems of productions ensure that all the products we buy will have detrimental impacts most of which we may never even consider."

When asked about depriving herself, one freegan (who quit her six-figure job for the cause) explained, “I do have some mixed feelings. It’s always hard to give up class privilege. But freegans would argue that the capitalist system is not sustainable. You’re exploiting resources. Most people work 40-plus hours a week at jobs they don’t like to buy things they don’t need.” There are other grassroots group like this, including Freecyle.org, which is geared towards giving and getting already used items, and the old standby for free books, Book Crossing. Who needs Craigslist?