Dump a Pimp, Expect to Get Your Weave Ripped Out 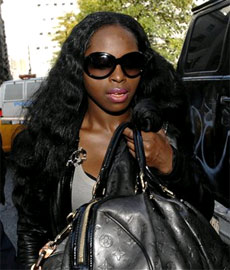 Oh, Foxy! We think that Brooklyn rapper Foxy Brown is simply a magnet to trouble. After her various scrapes with the law (most recently throwing a bottle of hair glue at a Florida beauty salon) and going to anger management counseling, you'd think she'd want to keep a low profile. But now the Daily News reports that the petite performer was attacked by her ex-boyfriends' gal-pals, after Brown dumped the guy when she found out he was a pimp!

Brown was attacked early Saturday morning after she dumped her boyfriend in East New York. They were in his car, and police sources tell the News, "This ex-boyfriend called some of his women, and they pounced on her. They beat her bad. They ripped out her hair weave. Her hair was a mess - and that seems to be what she cared about most." Ouch. And the attackers also pulled out Brown's hearing aid.

Apparently Brown met the boyfriend at a recording studio and didn't realize that he had a shady past. After the attack, Brown went to a local precinct to report the crime; she even rode with the police to find her attackers, and found one person who the police arrested and charged with assault. But: "Police sources said Brown stopped cooperating with the officers when one of her representatives arrived on the scene."