P.S. Bookshop, the independent DUMBO bookstore that's been in the neighborhood for almost a decade, is desperately trying to avoid an unhappy ending.

Founder Yuval Gans, who lives in nearby Downtown Brooklyn with his wife and two kids, has watched the neighborhood transform around him in recent years, with the arrival of big-box retailers—from BoConcept, to Brooklyn Industries, to West Elm. Meanwhile, commercial real estate taxes are increasing annually. P.S. Bookshop hasn't kept up with its payments for the past five years—real estate taxes Gans says he didn't know about until last summer.

Gans's landlord Two Trees, those neighborhood big-shots, recently informed him that P.S. is behind on those real estate taxes to the tune of $40,000. The balance is due by the end of the fiscal year, which falls on July 1st. Gans admits that, $40,000 aside, he's already struggling to hold his own in the neighborhood where, "Commercial tax has been doubling with every passing year, [and] in the last year alone it exceeded, for me, the amount of two months' rent."

Like many, he's started an IndieGogo crowdfunding page in hopes of staying afloat. Any additional funding beyond the $40,000 will go towards P.S.'s advertising budget, as well as event planning, a website overhaul, and updates to the shop's layout and window displays. For the past two-and-a-half years, Gans has also been exploring the option of opening a mini-cafe in the front of his bookstore, as a way to increase foot traffic and give shoppers any excuse to linger.

Gans said in a statement on the IndieGogo page:

P.S. Bookshop is my labor of love.... However, the shop has yet to secure my children's future. This was never a get-rich-fast plan. Surviving in Dumbo for the past nine years hasn’t been easy. Many businesses around me didn't cut it.

The bookstore, which was further north on Front Street for many years before relocating to its current home on Front and Washington, boasts an inventory that reflects the interests of the neighborhood: architecture and design are big, as is fashion and photography. Gans also hosts a popular weekly story time for kids (from the website: "COVERING TOPICS SUCH AS: WHAT’S OUR FAVORITE FOOD? HOW DO WE FEEL ABOUT GOING TO BED ON TIME? YOUNGER SIBLINGS - ARE THEY NECESSARY? ARE WE POTTY TRAINED OR NOT YET?"), and juggles three different kiddy music classes. 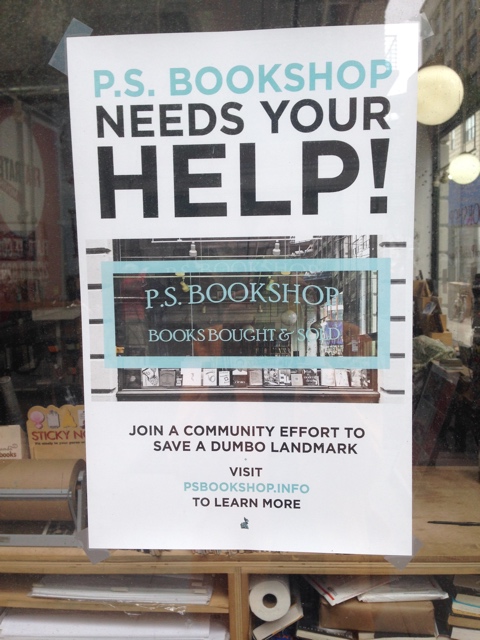 This afternoon, sitting in one of the oversized armchairs clustered near the front of his shop, Gans explained that, ironically, this past year has been his most successful yet. As more and more tourists pass through, he's supplemented book sales with popular magnets, postcards and mints. In fact, 2014 was the first year he was able to go on vacation with his family. He's recently expanded his staff, and stopped working seven days a week. Which makes this new development all the more painful.

While many independent bookstores have found a successful niche in hosting events with high-profile authors, Gans insists that he's "not up on the New York Times Best Seller List." Instead, he's passionate about the physicality of books—he believes that the experience of gripping a sturdy hardcover is one that's still worth paying for. "When photography was invented, painting didn't die," he argues. "When television was invented, movies didn't die."

Books, Gans says, are romantic objects—content aside, there's something fundamentally sentimental about them. "The other day, a woman came in with a paperback copy of her favorite Normal Mailer," he told us. "I had a hardcover of the same book, for $20. She was unsure if she wanted to buy it, since she already has a copy. I said, Look at the spine. How does it make you feel? Does it give you comfort?" Gans reports that, after that speech, "She went for it."

In the first nine days of his campaign, Gans has made $5,959 of his $40,000 goal. If he doesn't reach the mark by the time 30 days are up, he stresses that he's still hoping to remain open by any means possible. In DUMBO, Gans says, "It's not just about winning your lease. It's about keeping it."

Two Trees spokesman Dave Lombino said in a statement this afternoon, “The owner has not raised this issue with us, but we would be more than willing to work with P.S. Bookshop to reach a creative solution to ensure that he can cover what is owed in taxes and remain in the space.”

#dumbo
#p.s. bookshop
#two trees
#original
Do you know the scoop? Comment below or Send us a Tip