Dublin And Edinburgh Await You: A Fall 2012 Guide To A Fantastic Getaway

Planning a big trip toward the end of the year might seem counterintuitive, with Thanksgiving, Christmas, and New Year's Eve already in the mix. But savvy travelers know that autumn means more deals and fewer tourists—a perfect combination. If you're trying to use those vacation days and aren't sure where to start, consider crossing the pond to Dublin and Edinburgh.

The two cities share a love of history, literature, and theater—not to mention barrel-aged whiskey—and for all the culture you soak up, there's always a pub close at hand. 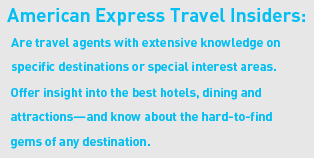 As part of our Fall 2012 Getaway Guide, we've teamed up with American Express and their American Express Travel Insiders to help you plan an awesome nine-day trip—that's five vacation days and two weekends—in Dublin and Edinburgh.

"Fall is my favorite time to visit Ireland," says American Express Travel Insider Christine Anthony. "I love it when the crowds are gone, and the weather can be spectacular in October, not cold and rainy as people might expect." While the weather might start to get unpredictable in November, there are still crisp days to be found in Scotland. As the locals say: "Sláinte!"

WHAT TO DO IN DUBLIN

It's not a trip to Dublin if you skip the Guinness Storehouse. The interactive museum will teach you everything you ever wanted to know about Guinness (and some things you didn't), and every tour ends with a well-deserved pint. 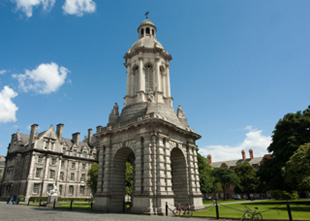 Trinity College
In the center of Dublin, Trinity College's medieval campus has drawn writers and readers for years. Travel Insider Christine Gregory recommends viewing the Book of Kells, "a lavish and internationally renowned ninth-century collection of the four gospels."

There's also the James Joyce Centre and Dublin Writers Museum. Wilde may be long gone, but you'll think he's still around after a couple of nights in Dublin. When night falls, take a long stroll down the Temple Bar neighborhood's cobblestone streets. As you wander past the area's countless pubs, listen closely for live Celtic music, and drop in for a pint when you hear something good. 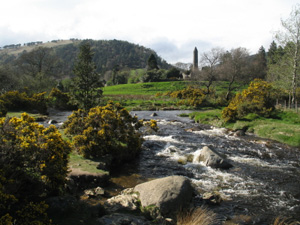 County Wicklow
A few too many pints the night before? Travel Insider Andrea Andrade recommends taking a little trip outside of Dublin and visiting Trooperstown Forest in County Wicklow, only an hour outside of the city. "It's a great place for a hike," says Andrade. "The blackberries are blooming, and a huge oak tree with leaves just turning leans over the water on the southeastern bank." It's a wholesome travel moment—no Guinness required.

Another worthy trip outside the city is to prehistoric site Newgrange in County Meath (there's a shuttle bus). Built around 3200 B.C.—which makes it older than Stonehenge or the Pyramids—the ancient temple is an acre-large mound surrounded by stones with megalithic art.

WHERE TO EAT AND DRINK IN DUBLIN 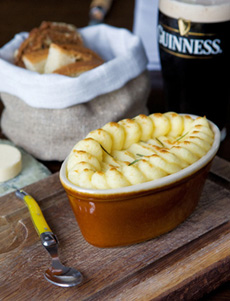 At the Pig's Ear
In Dublin, it's not just meat and potatoes anymore—although plenty of chefs are exploring the possibilities of old-fashioned Irish cuisine.

Travel Insider Christine Gregory recommends visitors "enjoy a musical pub experience at Abbey Tavern, with traditional Irish music over a traditional Irish dinner." The pub, in the town of Howth, is just a few blocks from the sea, and a world away from your local sports bar.

In the Stoneybatter neighborhood, northeast of the city center, L. Mulligan Grocer is quietly attracting a local following with a hearty bar menu (think slow roasted pork belly with a rum reduction), and one of the city's best collections of Irish craft beers and whiskeys.

There will always be Guinness—so why not try a Dark Arts Porter from tiny Trouble Brewing?

A Saturday destination for Dublin foodies is the Temple Bar Food Market. And foodies also rave about Eden Restaurant, which has a critically lauded lunch menu—two courses for €20 or three courses for €25.

WHERE TO STAY IN DUBLIN 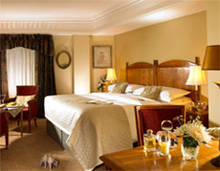 O'Callaghan Davenport Hotel
Sunny skies are a bonus at The Royal Marine Hotel, in the town of Dún Laoghaire, just south of Dublin. Guest rooms feature commanding views of the Irish Sea at this luxury landmark hotel.

If you're looking for something closer to the city center, you can't do much better than the O'Callaghan Davenport Hotel. Located at the edge of historic Trinity College, the Davenport occupies a historic 1863 building that's an easy walk to the surrounding pubs.

Another great option for anyone looking to stay close to the city action is the Castle Hotel, located right in Dublin city center.

When booking through the Fine Hotels & Resorts program, American Express Platinum Card members get room upgrades upon availability, special check-in and check-out times, and breakfast options when booking at participating hotels such as the Four Seasons, The Merrion, The Westbury, and the Westin—which total a $450 value per stay.

HOW TO TRAVEL BETWEEN DUBLIN AND EDINBURGH: The fastest way to hop across the Irish sea is to take one of the numerous one-hour flights between the two cities (a roundtrip fare can be as low as €30 on Ryan Air).

WHAT TO DO IN EDINBURGH

In Edinburgh, Travel Insiders rave about Edinburgh Castle, the city's centerpiece. "The Castle literally cannot be missed," says one Insider. "The fortress, which dates back to the 12th century in parts, captures the full history and culture of the ancient city." 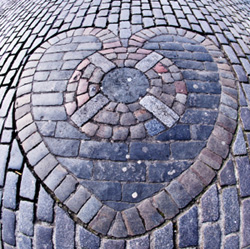 Heart of Midlothian built in the Royal Mile
After exploring the castle (and plugging your ears for the ceremonial firing of a very loud gun, which occurs daily) walk the Royal Mile—Edinburgh's historic high street—to Holyrood Palace, the Queen of England's official residence in Scotland. It's open for tours year-round, but if it's closed to visitors when you drop by, don't take it personally—it means the Queen is visiting.

After dark, pick up a ticket for "A Midsummer Night's Dream" at the Royal Lyceum Theatre. The theater dates from 1883, but the repertory company's take on the Shakespeare classic is nothing if not modern. Another classic Scottish tradition is the ceilidh, which features Gaelic dancing and singing. Every Friday night at Ghillie Dhu, there's a Burly Ceilidh Club, which offers dinner as well as the revelry.

For shopping, the West End and Stockbridge neighborhoods are the best bets for independent and vintage boutiques. For designer options, head to New Town. The city is full of fantastic fashion—including 21st century kilts.

WHERE TO EAT IN EDINBURGH

Over in Edinburgh, you'll get a slight buzz just from navigating the city's winding streets. If that's not quite enough, head to Amber Restaurant, located inside the Scotch Whiskey Experience in the Cowgate neighborhood. The latter offers an "It's A Small World"-style ride, which you can skip. Instead, mosey up to Amber's bar and order a flight of whiskeys from the different Scotch regions—Highland, Lowland, Islay, and Speyside. 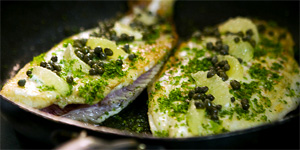 A dish at Ondine
A block away, Ondine is earning rave reviews for its thoughtful locally-caught seafood dishes. Chef Roy Brett's ever-changing menu is simple and focused, never heavy-handed, and the selection of local oysters is second to none.

The most popular restaurant neighborhood in Edinburgh is in the Port of Leith, a working-class area on the city's northeast coast. At The Kitchin, a Michelin-starred spot on scruffy Commercial Street, Chef Tom Kitchin serves refined plates like roasted venison loin with a beetroot gratin and chestnuts, with produce sourced from nearby farmers.

After your meal, walk a couple doors down to Bond No. 9, a cocktail bar with rough-hewn beams and an alluringly dark vibe. Ask the bartender for a Witchery (saffron gin, mint, lemon, sugar, and champagne) and toast to finally getting away.

If you want to sample haggis and blood pudding, try brunch at Urban Angel—they even have veggie haggis! For the cheese fanatics: I.J. Mellis offers European selections that are gasp unpasteurized.

WHERE TO STAY IN EDINBURGH 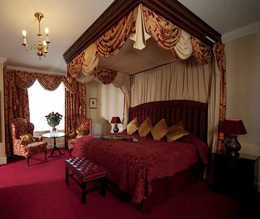 The Howard Hotel
To spoil yourself during your stay, check into The Glasshouse, a five-star boutique hotel next door to the Edinburgh Playhouse. Tucked behind the façade of an old church, the hotel combines historical details with a strikingly modern sensibility. Rooms have floor to ceiling windows, and a two-acre roof deck provides plenty of room to roam.

A few blocks away, The Howard discreetly occupies three Georgian townhouses. The plush boutique hotel has just 18 rooms, along with a butler staff and a much-praised 14-seat restaurant, The Atholl.

When booking through the Fine Hotels & Resorts program, American Express Platinum Card members get room upgrades upon availability, special check-in and check-out times, and breakfast options when booking at participating hotels such as the Rocco Forte The Balmoral Hotel, which totals a $450 value per stay.

Whether it's wandering Dublin's cobblestone streets or exploring one of Edinburgh's medieval ramparts, you'll find it hard not to be inspired. Historic and innovative—in Dublin and Edinburgh, that's the name of the game of this journey.