by Rhiannon Corby and WNYC Staff

Over the years, the R&B singer has been accused of sexual abuse and statutory rape (he married the singer Aaliyah in secret when she was 15 years old, and he was 27). In the summer of 2017, allegations resurfaced that Kelly had been keeping women in a so-called “sex cult.” He has faced increased scrutiny in recent weeks following the release of the Lifetime documentary Surviving R. Kelly, which highlights accounts of numerous women who say the singer sexually abused them.

Kelly has never been convicted, and has instead gone on the offensive by smearing accusers.

They rotated through chants of “SONY Music has no shame, they only care about profits and fame” and “RCA, take a stand, we won’t stop till Kelly’s banned.” Leaders of advocacy groups were called on to speak; some addressed Kelly’s victims, others read letters of support, and at least one person sang.

Natalie Green, the Communications Manager and Spokesperson at the feminist advocacy group UltraViolet, pointed out the racist implications of the response to the allegations against Kelly. “At the end of the day, we have to accept that R. Kelly was able to get away with decades of abuse, specifically because his victims were young black women,” she said. 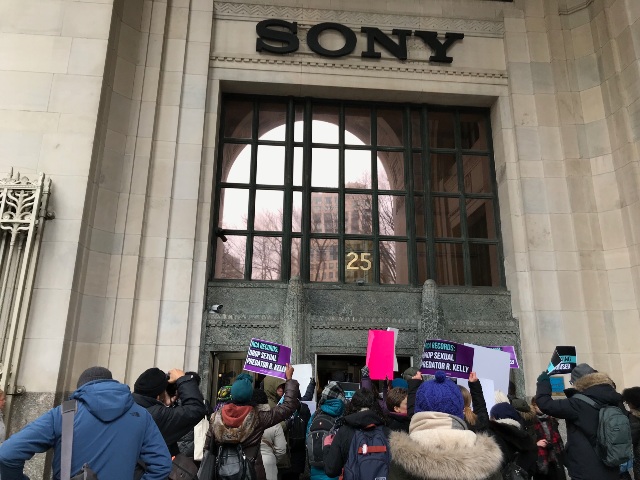 One protester, Daria Graham, had arranged to be late to work so she could come to the rally. "I’m a mother, I’m a daughter, and I have a daughter," she said. "He’s no longer a sex abuser, he’s a predator. And it has to be stopped.” Asked what she’d say to executives at RCA if given the chance, she said, "Tomorrow is too late. This has been thirty years. Don’t be the last one. Come on."

After advocates gave speeches, protesters walked across the street to the entrance of SONY’s headquarters carrying boxes filled with over 200K petitions demanding the label drop R. Kelly. Police officers looked on, and eventually cleared protesters away from the entrance.

Asked to weigh in on whether they were still listening to R. Kelly’s music, New Yorkers’ responses were varied. “I’m not listening to his music and I do feel like people should stop, to be honest,” said Antony Nelson, who lives in the Bronx and commutes into Manhattan for work. “If you listen to a lot of the lyrics of his songs, it all makes sense how vulgar it was to young women,” he added, pointing to songs like R. Kelly’s “Bump n' Grind,” in which Kelly sings, “ I don't see nothing wrong with a little bump and grind.”

Kaitlyn Brooks, who was visiting New York for work, had a different take. “He’s a musician. That’s his job,” she said. “But what he’s done is him as a person, versus him as a music maker—I separate the two.”

According to TMZ, RCA/Sony claim they will not produce, fund, or release new music by R. Kelly until criminal investigations against him are resolved. Kelly still has two more albums left before his contract with RCA is fulfilled. SONY Music declined to comment on the rally.

And earlier this week, attorney Gloria Allred said that one of his accusers, Faith Rodgers, would be talking to the NYPD. Rodgers previously sued Kelly for "mentally, sexually and verbally" abusing her—including allegedly locking her in rooms, engaging in "non-permissive sex," and infecting her with herpes.

Rhiannon Corby is a producer at the New Yorker Radio Hour, and contributes reporting to WNYC News. You can follow her on Twitter at @rhiannoncorby.

#Music
#protest
#R. Kelly
#sony music
#surviving r. kelly
#original
Do you know the scoop? Comment below or Send us a Tip