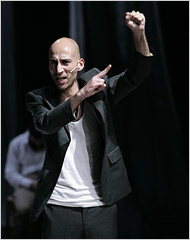 Volatile Dutch actor Youssef Sjoerd Idilbi did two things that are almost unheard of during a Sunday performance of the play Is.Man at St. Ann’s Warehouse. The first warms our heart: He stopped his performance to confront an audience member about a ringing cell phone. His second move brazenly defied the theatrical tradition of ‘the show must go on’. Technical problems with the sound board had caused the cancellation of the previous night's performance; when those glitches resurfaced 20 minutes into the Sunday show, Idilbi tore off his microphone and stormed out of the theater. Awkward!

We spoke with St. Ann’s Artistic Director Susan Feldman, who told us, “The director and I went out after him... He just said to me, ‘I’m sick, I’m really sick, my stomach hurts.’ He was really overwhelmed and we couldn’t convince him to stay.” Playwright Adelheid Roosen stepped in and, script in hand, finished the play, which probes the hot-button issue of honor killings in Muslim societies, particularly immigrant communities in Holland. As of 11:00am this morning, it was unclear whether Idilbi, who does almost all the talking during the play, would return for the next show tomorrow night.

UPDATE: We've just been informed that Idilbi will be back for the Wednesday performance.

Is.Man is inspired in part by Roosen’s interviews with men convicted of honor killings in Holland; it’s performed in repertory with another play, The Veiled Monologues, which draws on her interviews with over 70 Muslim women from Saudi Arabia, Kuwait, Somalia, Pakistan, Iran and Iraq, asking them similar questions about their sexuality. Tickets cost $30, the run ends Sunday.

#Artistic Director
#As
#cell phone
#iran
#iraq
#Pakistan
#saudi arabia
#theater
#tickets
#Wednesday
Do you know the scoop? Comment below or Send us a Tip
A new Gothamist is coming! We’ve moved comments over to our beta site. Click here to join the conversation and get a preview of our new website.