Dr. Strangedrunk, Or How I Learned To Stop Worrying And Love Tolerate SantaCon My Rudolph Cat Christmas sweater and I began my Great SantaCon Adventure in Williamsburg, a neighborhood whose death knell came long before the Santas decided to gather in McCarren Park. Still, though SantaCon was well underway by the time I got to Bedford Avenue at around 1 p.m., the neighborhood was surprisingly peaceful, with only sporadic groups of Santas stumbling from bar to bar. There were also a lot of terrified children on the street, and it was amusing to watch the drunk Santas ruin their Christmas magic, because I am Jewish and bitter. "Well, Santa, he's coming to town," one mother helplessly explained to her young daughter when asked why a gang of Slutty Mrs. Clauses were singing an AVICII song outside the remains of The Charleston. Don't worry kid, he's still coming, though it appears he has dubious taste in women. 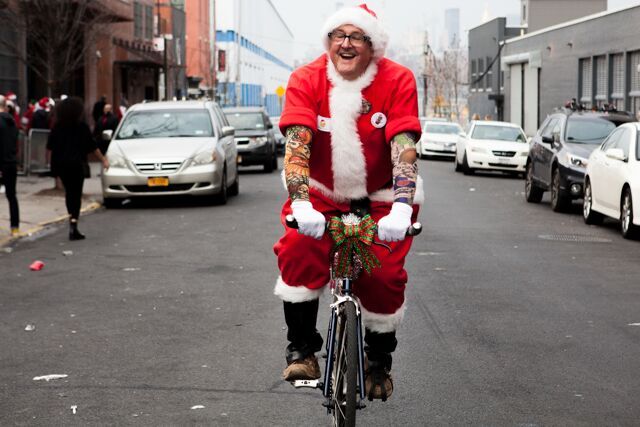 The line to get into Verboten, a club located in the heart of the West Bedford Meatpacking District, was daunting. Instead, I met photographer Scott Heins—who refused to wear a matching Cat Rudolph Christmas sweater—at Viva Toro, a bar I did not know existed before this weekend. They have a mechanical bull! Inside, the scene was much like one might find in a bar of its ilk on a given Saturday night, except it was 2 p.m. and people were dressed as scandalous reindeer.

Villain, another Williamsburg venue whose non-SantaCon purpose escapes me, was far less crowded, with just a few hundred Santas milling about and drinking Modelo Especial. A handful of Santas were working the dance floor, and I unwittingly befriended a few of them:

Still, Williamsburg was relatively quiet, and it seemed, possibly, that SantaCon's moment had passed, the backlash finally deterring all but the staunchest participants. Had the terrorists won?

Then we went to the East Village. 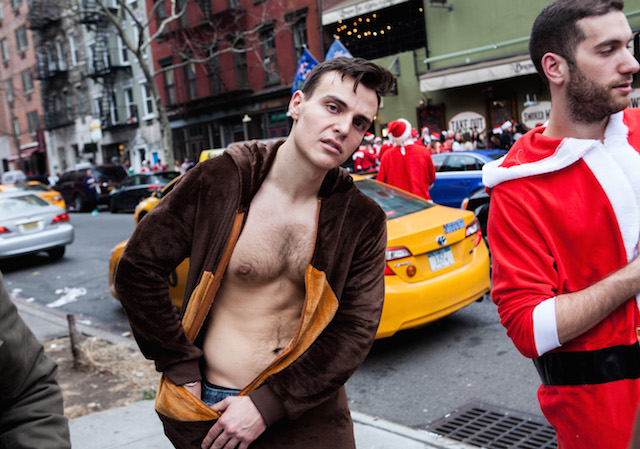 Manhattan, it turns out, is where the SantaConners live and breathe, and 3rd Avenue was a sea of Santas piling on street corners and languishing on interminable lines outside fine establishments like the Brazen Fox and Bar 13. A group of young women I spoke with outside Bar None said they'd skipped the Brooklyn segment of SantaCon in favor of pregaming at home on the Upper East Side. "We didn't try to go there," one told me, adding that she and her gang were just out to have a good time. "I don't know what I'm doing, that's why I am here," she said.

Many Santas piling in from far away lands like New Jersey and Connecticut also stayed away from Williamsburg, which is farther from the PATH train than the crowd at Whiskey Brooklyn would lead you to believe. "Don't tell us to go to Brooklyn. We tried. We got lost," Grace, 23, told me, while waiting on line outside Bar 13 with her friend Kyle. Grace pointed out that she'd spent most of her SantaCon day queued up, an experience she did not have at Stamford's SantaCon last week. "I'm in New York and it's not as fun. I didn't have to wait in line to get into a bar."

Out-of-towners do not realize that waiting on line is a New Yorker's favorite activity. Once inside Bar 13, we took thimble-sized $10 shots of whiskey, hung out on a rooftop, watched a Dancing Jesus, and paid witness to the saddest room in all of SantaCon.

It only rained for a minute. Everyone is having fun! 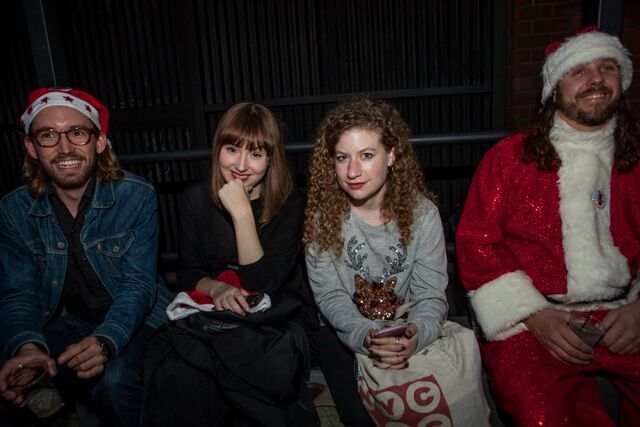 Faces of good cheer and dancing Jesuses aside, though, the scene was still relatively tame, and we only witnessed one brief bar scuffle. Our merry gang headed uptown to rooftop bar 230 Fifth, where I was briefly groped by an elf and sat near a puddle of vomit. Heins and our friend Cooper managed to befriend not one, but two men in Gingerbread Man costumes, and witnessed a man who claimed to be a "reggae rap star" woo a Candy Cane. SantaCon is pretty much ComicCon for alcoholics. 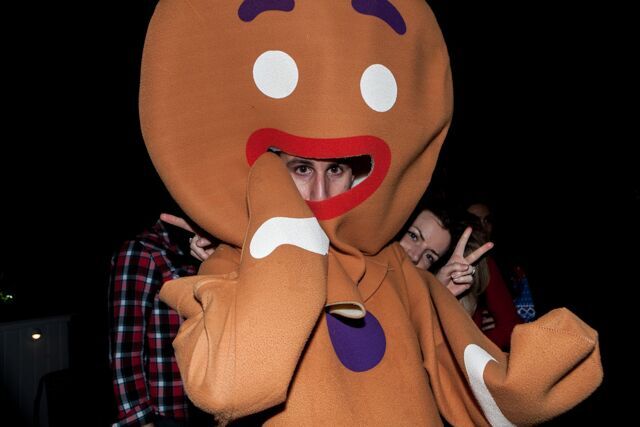 By then, it was 8 p.m., and SantaCon stragglers were getting their second wind. We fled 230 Fifth and wandered down 3rd Avenue to see if we could spot any fights, arrests, or additional puddles of vomit, but aside from some broken bottles and an unusual number of scantily-clad reindeer, the East Village was like it is on any other weekend night: still a shitshow, but most people kept their pants on.

Not everyone had as quiet a SantaCon as we did; there were five arrests—for assault, weapons possession, and drug possesion—and at least one hospitalization after a brawl on 29th and Broadway. But the fact is, when you are in SantaCon you don't notice these things, because you have become a part of the madness, and you've also probably had a lot of whiskey, which is really the only way to endure it.

And now some footage which brings us back to the beginning:

#dude man bro
#gothamist films
#santacon
#original
Do you know the scoop? Comment below or Send us a Tip