Dr. Eckleburg's Eyes Get a Museum 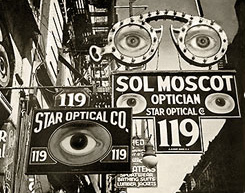 Today marks the grand opening of the Moscot Museum. You know Sol Moscot, the lens shop with giant yellow bespectacled signs that look over the streets of New York like Dr. Eckleburg's eyes? Apparently they're not much less symbolic -- sticking around New York for the past 100 years is no small feat, and must stand for something. But a museum, really?

The Moscot Museum will showcase never before released, historic black & white photographs of NYC’s famed Lower East Side from the 1930s to the 1970s.

The vintage photos depict what life was like for immigrants, who lived in Manhattan’s most eclectic neighborhood, and are a vivid reminder of what makes New York City the unique and interesting place it is. Also featured, unreleased vintage family photographs from the past 80 years.

Sounds like a good spot for "history buffs and NYC-philes," whether they need some new lenses or not. If you are fancying some new frames (Johnny Depp prefers the Moscot Originals vintage-inspired glasses), the museum's press release reminds us that it's just below their flagship store. A little history on the spot: in 1899, Hyman Moscot began selling ready-made eyeglasses from a pushcart on Orchard Street, later renting a retail space at 94 Rivington Street in 1915, and eventually settling in to their Orchard Street location in 1951. And ever since they've "brood on over the solemn dumping ground...no face, but, instead, from a pair of enormous yellow spectacles which pass over a non-existent nose."

The Grand Opening is today from 1 to 7pm at 118 Orchard Street, and runs through December 31st.