Are you ready to geek out? On October 9th and 10th, more than 300 musicians will gather onstage at Radio City Musical to perform composer Howard Shore’s award-winning score to The Lord of the Rings: The Fellowship of the Ring live to Peter Jackson’s film. The ensemble is as epic as the movie, and includes Switzerland’s 21st Century Symphony Orchestra, the internationally-acclaimed The Collegiate Chorale, the Grammy Award-winning Brooklyn Youth Chorus, and renowned soprano Kaitlyn Lusk, all under the direction of celebrated Maestro Ludwig Wicki.

To get in the elven spirit, on October 1st there will be a free panel discussion at The Paley Center for Media moderated by Kurt Loder (MTV) with panelists Howard Shore, Doug Adams (author, The Music of the Lord of the Rings Films), and Billy Boyd ("Pippin" in The Lord of the Rings films); details here. We recently questioned Adams about the Radio City event, his forthcoming book, and why they're not performing the score for the entire trilogy.

So what is it about the music in Lord of the Rings that you just had to write a book about? Well, it's sort of a twofold thing. I mean, it's of course incredibly emotional music. Howard [Shore, composer] built everything, the structure of his work, on top of the structure of Tolkien's work, so it has a beautiful architecture to it all the time, they way that musical ideas are related to one another, the way that Tolkien related cultures and objects to one another. So there is the incredible drama to that. Happily, there is also an incredible amount of respect from the filmmakers for the power of music and for the importance of the story. So, a lot of times you'll see a film score where this is flipped around and this theme doesn't consistently represent that and this piece of music has been chopped into little strange pieces. That sort of thing happens. There is a real respect for a musical tribute, and it just came out of an uncompromised and incredibly moving piece.

Do you think that the score will have a greater longevity than the score for the Star Wars trilogy? I think so. I mean, it's hard to believe that we're already coming up on the 10 year anniversary of the Fellowship of the Rings, but as these performances prove, it's very much on people's minds all the time. We're drawing huge crowds around the world. We were at Royal Albert Hall last year. We played Switzerland, Poland, Germany and now we're coming to the U.S. and Radio City Music Hall, so I think it will have those types of legs and will always be around. 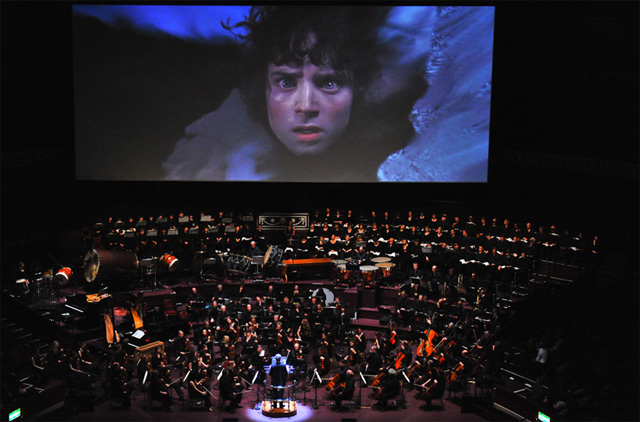 Do Howard Shore and John Williams have a collegial relationship or are they really competitive about their work? Well, they don't exactly run in the same social circles. I was always shocked when I got into the world of filmmaking. You always expect all these guys to know each other and hang out at some exclusive country club that none of us have heard of. But I think they're both appreciative of one another's work. I know Howard enjoys John Williams's work, and Williams was the first guy clapping when Howard won his Oscar in 2002. So I think that mutual admiration is going on there. Certainly, any composer is a bit competitive, but always striving to do their best. So there is a friendly rivalry of sorts from both.

Are you also a musician? I am, yes.

Have you actually played some of the score yourself? I didn't play in the recording sessions. I played in community orchestra arranges and stuff like that, but I always kind of gravitate towards the back of the stage when I go to these performances because of the percussion stuff. I think, "Oh, I could just do it one night and no one would notice." I haven't had the guts to try that yet.

Now at Radio City the score's going to be performed by 300 musicians live. How does that come together? It sounds like an epic challenge. It's an immense challenge. At Radio City we've got the 21st Century orchestra coming in from Switzerland, who thankfully have played the score a couple times with the same conductor. And the core groups are vocal groups, so they have to start months ahead of time learning all these Tolkien languages and pronunciation of Elvish words and Dwarfish words and stuff that they don't teach you in music school! And then the conductor has a really difficult job. He's conducting with a system called the Oracle system. And in a nutshell it splashes different colors of light on this little monitor that he can see, and that shows him where he needs to speed up and slow down and where he needs to line up a particular measure with a particular action on screen. He's the only one that has this little monitor that he can see and he's up there conducting the musicians to respond to his baton and he just has to keep together. It's a massive responsibility for the conductor, but thankfully he's done this a couple of times and he's wonderfully talented, so he keeps it together. But it's hard work.

Yeah, that's fascinating. It must be a lot of pressure to keep the whole thing together in time with the movie that's screening simultaneously! Yeah, it's like rubbing your head and patting your stomach in front of 10,000 people for 4 hours straight.

How come they're just doing the first film? Why can't they do the whole trilogy? Well, I mean beyond the question of preparation for all these things, I think it's also, how long can an audience sit still for? If you do the entire trilogy, you have something pushing 9 hours in the theater.

You'd have to break it up. There would be breaks for meals, but they've done that in New York with theatrical productions recently, like Coast of Utopia. Right, and I think that that is something they'd like to try in the future. I think they're going to try that in Switzerland in a couple of years. Right now, for the "Fellowship," they began the preparation of the music and learning the score for conducting in 2007 and they premiered this in '08. Next year they're going to do Two Towers, and right now they're finishing up work on Return of the King, which will be premiered in Europe this coming spring. It's really a question of logistics because they don't have all the music prepared at this point.

When you say prepared, what's to prepare? They have to adapt it for the live performance? Well, to a certain degree, yes. Every once in a while there's a short bit of music that didn't make it into the original film that Howard wants to be put back, or little things like that. It's a composer's version of the film where you get a little more music than the theater back in 2001. So the technicalities of that. Composers, when they work on films, sometimes use notations that they may reconsider had they had more time. It's a fairly frenetic period of composition. So with some of those things they try to find an easier way for musicians to understand them.

Also, consider recording sessions. If you have a piece of music that runs for 10 minutes in a film, that's probably nine or ten separate compositions. The recording session has you do one and then two. But for a performance like this, it has to be returned to one composition. So there's figuring out some notational things. Considerations of how to get the orchestra to respond to changes their notes don't have. There's a lot of logistic work. But it's a great idea to do the entire trilogy at some point. I think it's definitely on the long term plan.

And when does the book come out? We don't have an exact date pinned down. We have to, like everybody else, feel out the various legal rights issues that everyone's been working on. But we're all in the clear, and we can pick our date now.

And it's going to have photography from the film? Is it more like a coffee table book or an academic thing? It's definitely for people of all different music education. If you're a casual fan and just love these stories and find the music very moving, we deal with everything from a very dramatic abstract and how Shore uses his music instead of the story. If you're more of a musician or have that background, we have a user-friendly music analysis for how these things were written and the rhythmic relationships and things like that. We tried to create the book in layers, so just coming at it from an emotional standpoint you'll be completely satisfied. If you have a little more training you can dig deeper, that's there for you too. It's been a real challenge to find the right tones. We've been working on it for the better part of eight years, so I think we got it in a good place!