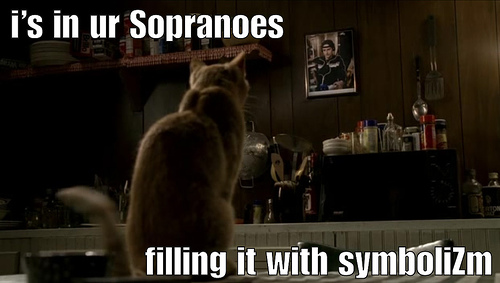 The Sopranos finale is going to be talked about until the end of time, we've come to grips with that. The open-ended ending wasn't the only mysterious part of the hour long episode, though. In the process of picking apart each and every detail of the final hour, people are now asking: "what about that cat?" Or shall we say, cats...there were three playing that one role of the stray tabby. The Daily News reports that the cat (that was almost whacked by Paulie) "was, in fact, played by three cats - Timmy, Tommy and Terry - 4-year-old identical siblings who were plucked from a California field where they were abandoned as kittens." The trained ferals stole the show, and raised even more questions, as they stared at Christopher's photo. How did the cats take direction?

In fact, in probably the show's best scene, animal trainer Tasha Zamsky used treats and hand signals, and requested the crew to leave the set, in order to get the kitty to gaze in her direction. To viewers, the cat appears to stare obsessively at Christopher's (Michael Imperioli) photo in the basement of the Bada-Bing.

"Cats will stare at something, but if they hear something . . . forget it," Zamsky said.

And when New Jersey traffic outside Satriale's butcher shop proved too loud and dangerous to shoot the funny scene where the cat's lying next to Paulie's table - Zamsky requested that they fake it with a green screen.

David Chase is keeping his mouth shut about the finale, and any symbolism the cat had in it (Was it Christopher? Adriana? Was it there to symbolize Tony's nine lives?). The Daily News asked animal experts for their take. Amongst the cat conjectures:

"The cat in the episode stared at a photo of Tony's most evil deed - killing someone who loved him. The cat was passing judgment and as such is the poetic presentation of his mother, who often passed judgment, and to her way of thinking, was also killed by Tony."

Some interesting theories! Of course, maybe a cat is a cat is a cat. And maybe you can buy that photo of Christopher at the Sopranos tag sale today.