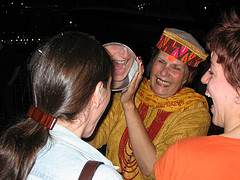 Donna Henes has been bringing peace to New York for decades as an Urban Shaman (you didn't know we had one?), and tonight she is charged with leading the Halloween parade. How does one woman handle all of this responsibility? We recently asked what her job entails, both on and off the parade route.

What is an urban shaman?
There used to be a person whose work it was to keep track of the seasons: to cite the cycles in order to secure a celestial continuity. Today there is no job classification for what I do.

As shamans in every culture always have, I create contemporary rituals for my community, which is NYC. My role is that of catalyst: organizing and instigating innovative, de-mystified systems for creative public interaction, celebration, and communion. I work to facilitate non-threatening, yet transformative ways for people to interrelate with each other, their own deepest and best selves, and the entire universe, in the interest of peace and positive community spirit.

It is my special concern to offer significant and relevant ways for city people in modern times to observe and relate to the wondrous workings of the world around us. The vast majority of the population of the planet now dwells in sprawling, paved, loud and light-polluted megalopolises. We are disenfranchised from the natural world, which is itself in the process of disappearing. Despite what most of us have learned of the solar system as children, it is difficult to remember on a daily basis that we are upside down, rotating and revolving, spinning through space at a terrific speed all at the same time, all of the time. To consciously realize that we are part of, and at the same time, painfully apart from, the plans and patterns of the cosmos. I believe that the only thing that can save our planet from ourselves is for us to start thinking of ourselves as the planet.

Will this be your first time leading the Halloween Parade?
Yes. I will be joined by my Blessing Band, a group of about 30 wonderful individuals who are deeply earnest in their desire to spread positive energy throughout our city.

What are your duties in doing so?
We will be walking at the head of the parade for the entire route. This is not a performance, but a real ritual. We will be clearing the streets of any negative energy and transforming them from secular passages into sacred pathways.

How will you go about blessing the parade?
We will be dressed all in white and silver to emphasize the purity of our intentions. We will not be wearing masks or face paint, as we want our eyes and facial expressions to express our sincerity. We will be offering our blessings using the smoke of burning sage, and also bubbles, glitter, bells and chanting.

What's the craziest Halloween costume you've seen over your years of living in New York?
Can’t say I can single out one crazy one. In fact, I don’t think any Halloween costumes are crazy, but really, fabulously creative. On the other hand, there is a homeless gent who dresses in gaffer’s tape and strange protective goggles made from bottles. That seems a little over the edge to me.

Can you tell us about the Eggs on End event you used to hold at the WTC?
I am now in the 33rd annual cycle of holding public celebrations for the official beginning of each season. 18 of the Spring Equinox Celebrations called, “Eggs on Eng: Standing on Ceremony” were held in the plaza of the World Trade Center. Since the destruction of the Towers, the event has been held at Battery Park, The South Street Seaport, and the Museum of the American Indian.

The event itself is astonishingly simple. The site, The Twin Towers, was a landmark megalith like an urban Stonehenge, which I decorated with day-glo orange ribbons, thus transforming a secular public place into a sacred space. I handed out scientific and mythological information sheets along with jelly eggs to the crowds. I lit flares to denote the number of days, weeks, months in a year. An orange laundry basket containing 360 eggs is passed among those in attendance. We all hold them up in the air together, pledging to walk on the earth as if we were walking on eggs. Promising anew, in honor of the season, to protect our fragile yet resilient planet home. We count down the minutes to the equinox. And when the time is right, we stand our eggs in unison in salute to spring. No matter how many people attend, the real event is always each single person‘s private experience of what gravity and balance and equilibrium might mean.

Response to the eggs has been phenomenal. There is something powerful in the image, in the experience, of the egg standing upright that touches people in a very deep place. Something incredibly moving that elicits extremely old and rarely accessed emotions. Standing an egg on its end, feeling it as the yolk shifts inside to find its perfect point of balance, is like holding the entire universe in the palm of your hand. The excitement is profound and never, it seems, forgotten.

Stood at the first moment of spring, the egg becomes the symbol of a new season, the birth of new life. Eggs On End: Standing On Ceremony is every bit a traditional vernal fertility rite. A popular, contemporary celebration of the return of green and growth and light after the dark winter. It is immaterial whether or not the egg can stand at any other time of the year (as some critics have maintained), the important thing is to recognize the symbol, the season, the sky, and the kindred souls who surround us. Cynicism magically disappears in the process of sincere participation. And, like the buds, the birds, of early spring, we, too, are renewed. We feel refreshed and energetic. We can then return with re-charged optimistic resolve back to what we have come to believe is the real world.

Please share your strangest "only in New York" story.
About 12 years ago while I was walking in the Brooklyn Botanic Gardens, a beautiful cockatiel flew right to me. I picked it up, but then I didn’t know what to do, so I just carried it around with me. Everyone who saw me stopped to offer a blessing in the vocabulary of their own spiritual tradition. “Oh, honey, God’s talkin’ to you!” “The ancestors send us birds as messengers from Heaven!” “The elders say, that when a bird flies to you, it brings good luck!” On and on it went with Caribbean, Chinese, Guatemalan, African American, Russian, Puerto Rican, and Korean folks offering blessings and bird advice. Because of their unanimous enthusiasm, I ended up bringing the bird home where she lived on my head for 9 years and laid 33 eggs!

Which New Yorker do you most admire?
My hat goes off to all New Yorkers who have managed to create a really workable and impressive peace. Nearly 200 nationalities live and work together here and we do it, for the most part, with mutual respect and good grace. We in New York City have seen the future, and it works!

Given the opportunity, how would you change New York?
I would put recycling bins for paper, glass and cans on the street corners as other big cities do. I would ban plastic bags and non-recyclable plastic takeout containers. I would put a hold on the out-of-control development until all buildings-in-progress were occupied and new infrastructures are put in place to support them.

Under what circumstance have you thought about leaving New York?
Never! I heart New York!

Do you have a favorite New York celebrity sighting or encounter?
There are so many well-known people in the city, that you realize celebrities are just people trying to go about their business like everybody else. So a sighting isn’t that extraordinary of a happening like it might be in say, Columbus, Ohio.

What's your current soundtrack to the city?
Unfortunately, it is the jackhammer concert right outside as they are doing something mysterious to my street.

What's the best subway line?
I love the Q and B into Manhattan from Brooklyn. They make hardly any stops and they go over the bridge. I never tire of the skyline and the views of the river and Statue of Liberty.

Where's your favorite place to see a movie in the city?
My bed.

Best cheap eat in the city.
Most ethnic restaurants gives you more than your money’s worth of flavor and value.