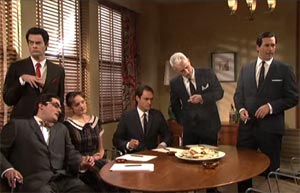 Last night's Saturday Night Live had its work cut out for it after the last few weeks. Weaving in actual Mad Men stars Elisabeth Moss and John Slattery alongside host Jon Hamm was a nice touch, but this is a week after the show featured cameos from Sarah Palin, Mark Wahlberg and Alec Baldwin. And it was a welcome return for Maya Rudolph, stopping in as expected to play Michelle Obama and sing a duet with Kenan Thompson dedicated to Amy Poehler's new baby. But that came on the heels of former cast members Bill Murray, Will Ferrell and of course Tina Fey all making high profile returns in recent weeks.

Yet with all those handicaps, the show still managed to keep its head above water with a strong showing from Hamm. It may have even bought itself some time in lieu of Poehler's absence by rolling out Coldplay for a rare third performance by the musical guest, doing their first big hit, "Yellow." Poehler did appear in one of the show's pre-taped segments and probably the highlight of Hamm's night, effectively taking his dark persona into the realm of comedy with "Don Draper's Guide to Picking Up Women":

After the jump is the pun-driven sketch we were surprised to see pulled out successfully titled "Jon Hamm's John Ham" and the Mad Men sketch sure to delight fans of the drama with Will Forte's take on the syllable-emphasizing junior ad exec Pete Campbell. And since the Poehler-Rudolph reunion doing "Bronx Beat" didn't get to take place as planned, here's the first time they did the sketch a little under two years ago.