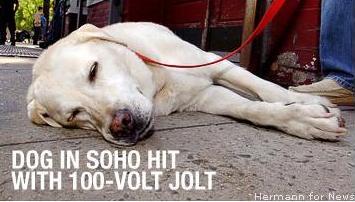 Getting shocked by an electrified manhole isn't just for the winter: Yesterday morning, a Labrador retriever suffered a jolt when he stepped onto a wet manhole cover on Thompson Street.

The Daily News reports that John Doran had been walking his 11-year-old dog Socha. When the dog stepped into a puddle, she "Socha let out a series of blood-curdling yelps - and collapsed near the curb." From the News:

"I never heard a noise come out of her like that before," Doran said. "She was screaming and yelling and fell on her side."

The cuddly 80-pound dog lay stiff in the water until a panicked Doran pulled her out. "I was freaking out, trying to get her out," he said. "She was stiff like a dead weight."

As a good Samaritan dialed 911, Doran frantically warned neighbors about the danger lurking beneath their feet.

"I turned into a crazy New Yorker, shouting, 'No, don't go in there,'" he recalled. "I was afraid for them. ... There are kids around here."

Totally - and lots of kids weigh less than 80 pounds. It took "three 911 calls and over two hours before authorities showed up at the scene and started investigating." Con Ed said that a cable had been touching the manhole AND that a previous inspection two months ago had shown the area to be safe. Hmm, have any people noticed Con Ed's livery-cab site safety crews in the area? At any rate, Socha was luckily eventually deemed "no worse for wear."

In February, a dog died from an electrocution and another was shocked but saved by dog CPR.