Does The US Have A Chance At The World Cup? Our Soccer Nerds Debate!

With the World Cup kicking off tomorrow afternoon, we asked our two resident soccer reporters/nerds—Gothamist's Dan Dickinson, and DCist's Pablo Maurer—to give us their insights for the tournament in Brazil. Read on for their picks for dark horses, sure-fire winners, and Pablo's dejected prediction for the US Men's team.

Dan Dickinson, Gothamist: Well, Pablo, here we are again. And somehow, we're not trash talking each other's MLS teams, but combining our powers to weigh in on the World Cup. This feels strange, but in a globally relevant way.

Pablo Maurer, DCist: Ah yes, the World Cup. That one time every four years when people who'd normally accuse you of being a socialist for enjoying this beautiful game all of the sudden buddy up to you at your local soccer bar. I'm looking forward to this. But enough with the pleasantries, let's discuss the main event.

Dan: I think it's safe to bet that the USMNT (yes, yes, US Mutant Ninja Turtles, we know) is on most people's minds. The US Men qualified for the World Cup with ease, were kind enough to save Mexico's entire economy by inadvertently helping them qualify, and ran a perfect 3-0 record in their send-off matches over the last few weeks. They seem to be getting into form, but they're in a tough group with Ghana, Portugal, and Germany. Who on the US side do you think will be the difference makers, especially with the legendary heroics of Landon Donovan absent this year?

Pablo: Sigh. That depends what you mean by "difference maker." I'm going to go ahead and predict that the US probably won't score a single goal in this tournament. Yes, I know that makes me an awful human being and officially closes the door on my hopes of ever being credentialed for another World Cup, but I just can't see the USMNT's back line (which is undeniably this squad's weak point) dealing particularly well with Cristiano Ronaldo, Lukas Podolski, Thomas Muller and whatever curse the Ghanian national team has put on them.

And that's to say nothing of the US' lack of attacking options—their most dangerous "weapon" being Jozy Altidore, a man who only managed to score two goals in his most recent EPL campaign with lowly Sunderland. Where art thou, Landon. Where art thou.

Real talk: the only way the US gets on the scoresheet in this competition is if they catch a team on the break—or perhaps through a moment of individual brilliance from Clint Dempsey or Michael Bradley. The former may very well happen, as every other national side in their group views an encounter with the Yanks as a "must win" and will likely push forward as a result.

Dan: How did I become the optimist in this relationship? No disagreement on the back line looking frail. During the friendly with Turkey, they left acres of space open, getting ripped up by through balls. That's Turkey, who's been to the World Cup once in the last fifty years. A team with a good attack—like Germany or Portugal—may have no problem destroying the hopes and dreams of American schoolchildren.

But I've got a little more faith on the attack. Jozy definitely struggled at Sunderland this year—partially service, partially fighting for minutes, and partially him duffing shots—but his hold-up play has looked good during the send-off games, and he did notch two goals against Nigeria. Given how streaky strikers can be, that may bode well. Clint Dempsey has been in good form for Seattle, Michael Bradley has plenty of quality in midfield, and Brad Davis may prove useful on set pieces. And Fabian Johnson has impressed me, basically coming out of nowhere as an outside back that can join the attack.

You really think three straight losses? I'm feeling like they can find at least one win, and at least one draw, although I'm conflicted on which matches those will be paired with. And four points was enough to get out of most groups in 2010.

Pablo: "Hold-up play." That's cute. Did you get that from this article? "His hold up play has been great" is what MLS coaches say about underperforming forwards to keep from getting canned. And yes: three straight losses. If they win a game, we'll fly the Gothamist flag at DCist HQ, which isn't even an actual place. But enough about that. Let's talk about some teams that we're sure will make it out of the group stage.

Dan: Never bet against the host country, especially when it's Brazil. They should have a cakewalk through a group where they drew Croatia, Mexico, and Cameroon. Argentina similarly won't struggle—Bosnia's only just qualified for their first World Cup, Iran is hardly a power, and Nigeria was some of the weakest opposition I saw during the US friendlies. Who's on your lock list? 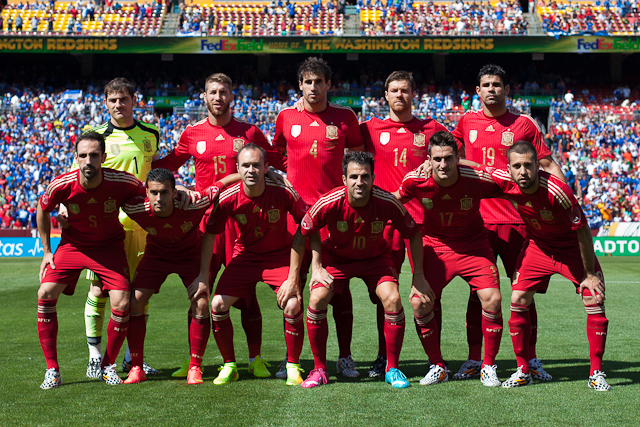 Photograph of Spain's starting XI before a match in D.C. by Francis Chung

Pablo: Spain. I'm shocked at the sheer volume of pundits who aren't picking them to advance beyond the round of 16. Yes, they aren't young bucks anymore, but this is a stacked squad. I had the pleasure of watching them train during their weeklong stay in the DC area and La Furia Roja look sharp. While they were drawn into a fairly difficult group alongside Chile and the Netherlands (sorry, Australia), I can't see them not advancing. Disclaimer: I am Spanish. My other picks: Argentina, Germany, Brazil.

Dan: Do we also agree on the teams that will likely crash out during the group stage? Australia are in way over their heads. Costa Rica are the odd men out in a group with Uruguay, England, and Italy. And Cameroon are only going to be chewed up and spit out by Brazil and Croatia.

Pablo: Honduras have looked positively awful in their send-off games. They were thoroughly outclassed by the same Turkey side that the lowly US defeated, and then proceeded to do their best to injure the entire English national team with a defensive performance that England midfielder Steven Gerrard called "horrific." I want them to win so badly; their head coach promised that the Hondurans would leave "blood on the field", but I'm starting to suspect he was talking about their opponents. As for Australia, yeah. No. Not happening. Who are your Cinderella picks?

Dan: I've got three. I'm keeping my fingers crossed for Italy, who have the best combination of pure talent and instant insanity in Mario Balotelli. They're in what looks like a tricky group, but then you remember England is England, and not the Premier League All-Stars. I think France, after spontaneously combusting in 2010, could find their way out of their group and make a strong run. And in Group H, which reads like a who's who of "Who?" teams, I wouldn't be surprised if Algeria made some waves, as they've been quietly good this year and nearly tripping up the US in 2010.

Pablo: I've got my eyes on Bosnia. They're organized in the back and have looked decent in the run-up to the tournament. If Edin Dzeko manages to string together a series of brilliant performances, I could see these debutants making their way past Nigeria to sew up the second spot in the group (Argentina is a lock to advance.) I also like Switzerland's chances. They connect well through midfield, press hard and are a completely different side than the one which was nearly unwatchable in 2010. Prediction time. Who's making the final here?

Dan: In my very ridiculous bracket, I've got Germany beating Argentina in the final, with Italy over Uruguay in the third place match. Sorry, Brazil.

Pablo: As much as I'd love to agree with Men in Blazers co-host Roger Bennett's suggestion that the US will win the entire tournament on a "Kyle Beckerman 65 yard wonder-strike," I've got Spain topping Germany in the final, while Argentina edges Brazil in the third place match.

For more insight (if you want to call it that) throughout the tournament, follow Pablo and Dan on Twitter.