Does Broadway's Hamilton Shine Without Its Star?

"Hopefully this guy is as good," says the theater patron sitting in seat K101 at the Richard Rogers Theatre.

I am several rows behind, eagerly awaiting one of the final preview performances of Hamilton, Lin-Manuel Miranda's hip-hop retelling of one of our nation's founding fathers, Alexander Hamilton. The Tony Award-winning composer/lyricist of In The Heights is also the show's star and at the epicenter of a viral storm extending far beyond Shubert Alley that has dubbed Hamilton the best thing to hit Broadway since A Chorus Line. And he's also very good at Twitter:

But I'm not here to see Lin-Manuel Miranda. Producers announced in early July that Javier Muñoz would be Miranda's alternate, playing one performance per week. Muñoz was in the company of In The Heights, where he understudied Miranda before taking over the lead role. I'm curious to see how Hamilton holds up without Broadway's new "It Boy" center stage. 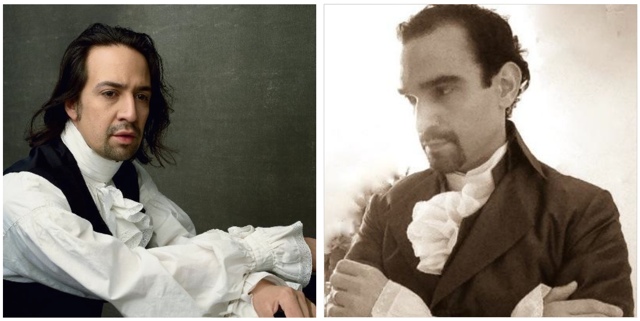 And apparently so is Miranda, who breezes in a few minutes before the show begins and snags a seat. It's a scorching July afternoon and a sprouting teenager, towering over six feet tall and dressed in a sweat-drenched long-sleeve shirt and tie, approaches Miranda for a selfie, for which the star gracefully obliges. Nearby heads begin to turn and a ripple of recognition and whispers wash over the audience as the house lights dim.

"People are interested in" Miranda, says Daniel Posener, Head of Business Affairs and Associate Producer at National Artists Management Company, who has been deeply involved in a number of heavy-hitter Broadway endeavors including Finding Neverland, Pippin, Chicago and more.

"He is young and he's stuck with the theater. He's committed to theater and I think that excites the creative community. Others have taken risks but there hasn't been anyone that's had this kind of wow factor. Is Hamilton great entertainment as well? I think so. The staging is spectacular." 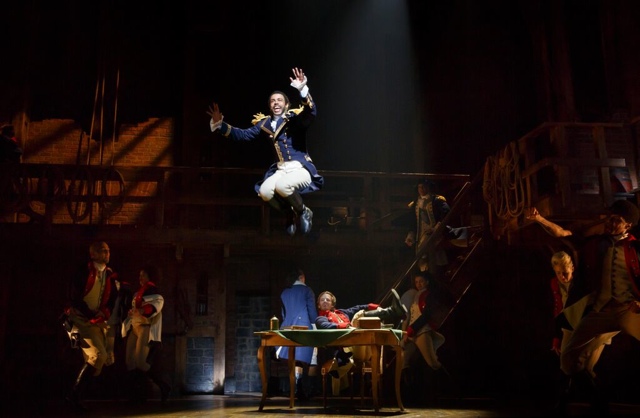 Posener thinks a seven-show week for Miranda is smart, both in terms of maintaining his energy level for performances as well as managing the maelstrom of media attention that will likely follow him through the Tony Awards as well as the coveted Pulitzer Prize for Drama.

As far Miranda's onstage draw? "I don't think people think he's the star nor do I think it will affect the show or box office," suggests Posener. "The show is the star, therefore he is the star as the creator, but not as the performer."

While the general masses may not be flocking specifically to see Miranda onstage as they did in 1978 to see the high-flying adored Patti LuPone in Evita or in 2003 for Idina Menzel's gravity-defying performance in Wicked, many theater fans want to experience the synergy and impact of the creator/performer combination.

"Hamilton is fantastic, but seeing Lin-Manuel on stage and knowing that he is responsible for everything being spoken and sung—as well as his overall contribution to the art form of musical theater (which in my opinion has transformed it in many ways)— is extremely moving," says regional theater director Scott Calcagno. "Witnessing the artist as both creator and performer is a once-in-a-lifetime experience for theatergoers." 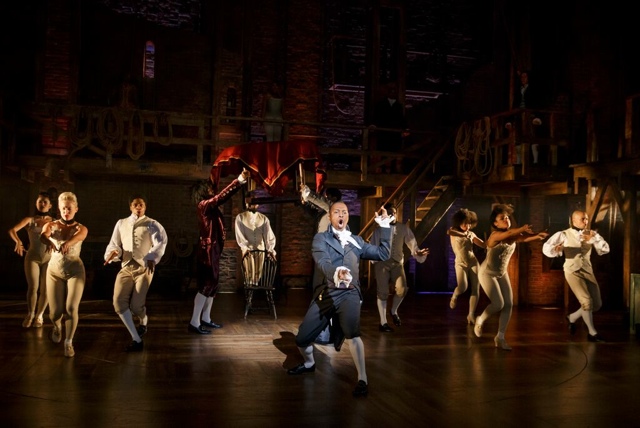 "A lot happens in 'the deal' behind closed doors," says casting director/partner Duncan Stewart of Stewart/Whitley Casting, whose credits include the current Broadway production of On The Town as well as the upcoming West Side Story for Carnegie Hall's 125th anniversary season. Stewart is referencing the myriad of decisions between producers, general management, artists and their agents in regards to how principal roles are covered.

In Hamilton's second act, "The Room Where It Happens" depicts complex negotiations between Hamilton, Thomas Jefferson, and James Madison as the country defines its financial system and Hamilton barters the capital's location from its short-lived stint in Philadelphia to Washington D.C. In the room where Hamilton the musical was starting to take shape, something else was happening: Javier Muñoz was becoming a pivotal force in Miranda's creative process.

"It's a unique working relationship," says Muñoz, who has been friends with Miranda in and out of the theater for years. "This kind of dynamic—where he is relying on me to tell the story while being the creator—requires a lot of trust and humility. A lot goes unspoken. I understand what he needs and what he's getting at." 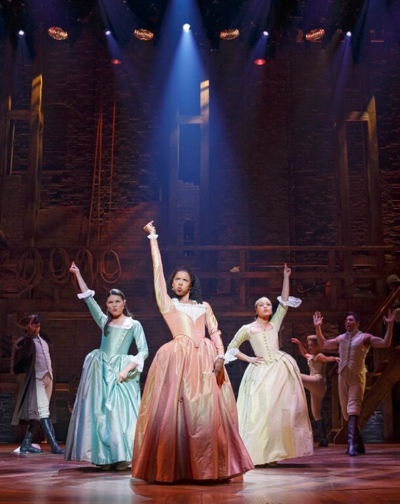 Throughout the months, Muñoz played a hodgepodge of characters, at one point even singing the role of Peggy Schuyler (Hamilton's sister-in-law) when enough women couldn't be gathered to workshop the material. But over time, the pair began to create the central character together. When the show moved to Broadway, the production team made the bold move to put Muñoz on the performance schedule on a weekly basis.

Stewart says it is more costly for producers to go the alternate route versus covering the role with an understudy who is already in the ensemble, but sometimes the role demands it. Whichever decision is made, it is crucial to the success of a long-running show.

"It's such a weird and slight distinction," Muñoz says of his title as alternate, "but it's vital for an audience's perception of what they are about to see." He is also the stand-by, meaning that Muñoz is contractually obligated to be at the theatre eight shows per week in case of an emergency. But the stand-by is rarely standing by. Muñoz has been utilizing every moment at the theatre to run through the show in the wings, his dressing room, or the understudy holding room—wherever he can find the space to fully embody America's 18th century bad boy. And it's paid off.

Hamiltonwowed critics during its original run at The Public Theater, and with good reason. Miranda's book, music and lyrics (inspired by Ron Chernow's biography Alexander Hamilton) have encapsulated the imperfect journey of our founding fathers, putting a West Indies immigrant at its center. Hamilton was a force to be reckoned with. Strategic on the battlefield and in the courts, he also created the first Bank of the United States and authored many of the Federalist Papers, a collection of essays aimed at ratifying the Constitution.

Muñoz thanks the creative team, including director Thomas Kail, music director Alex Lacamoire, and choreographer Andy Blankenbuehler, for allowing him to create his own leading man.

"We are two different people, there's a great distinction," says Muñoz. "[Lin-Manuel] has a scrappy, feral energy—even in real life you don't know what will happen to him. That freestyle energy is something I have to work at to portray."

Muñoz's approach is, perhaps, more internal, as he asked himself, "What is really driving this man? It is the root of where he came from: The Caribbean. Poverty. The death of his father. It was either 'give up or use it.' My version of the character is a loose cannon. My favorite thing about playing Hamilton is that he's completely imperfect. At every moment he is making questionable decisions—and the challenge is to play that honestly."

For the boy originally from East New York, Muñoz's journey back to Broadway is long overdue. He is a powerhouse to be reckoned with in Hamilton's title role. From Hamilton's early impetuousness and strong-willed confrontations with George Washington (Christopher Jackson) to career-spanning riffs with Thomas Jefferson (Daveed Diggs), James Madison (Okieriete Onaodowan) and Aaron Burr (Leslie Odom, Jr.), Muñoz fits perfectly in the pocket of Miranda's vernacular—a jagged, contemporary throwdown of hip hop, musical theater, and pop.

He also portrays a conveys a heartfelt vulnerability in his relationships with the women in his life, particularly his wife, Eliza (Phillipa Soo), in spite of a public sex scandal that tainted Hamilton's latter career. It is these deftly crafted imperfections—portrayed with an ever-shifting combination of muscularity, arrogance, passion, and endearment—that make Muñoz's performance so riveting.

Hamilton paid homage to A Chorus Line earlier this spring, where it premiered at The Public Theater 40 years ago. "There were a lot of things that were new about A Chorus Line, but let me focus on just one," teased artistic director Oskar Eustis after the company sang a rousing version of "What I Did For Love." 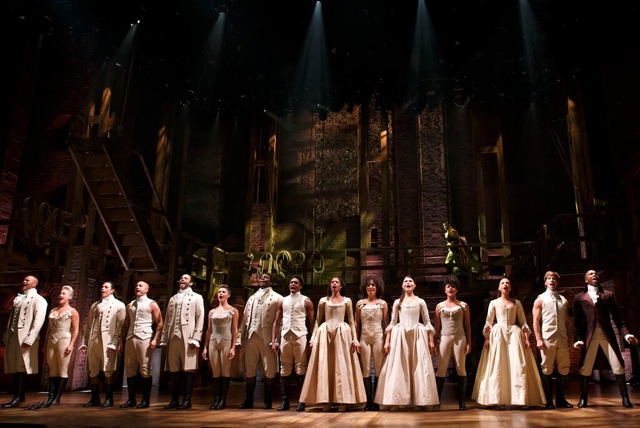 The cast of Hamilton (Joan Marcus)

"Let's for a moment, take the spotlight off the star of the show, and let's turn the spotlight on the people who are making the show work, who actually build it, who devote their lives to it," said Eustis of A Chorus Line. "Let's ask them their story… who they are… how they got here. That's the real show. And they changed the nature of the American musical theater. Hamilton is taking the story of the founding of this country told by the people who actually make up this country. Who are the strength… who built this country… and who are this country's future."

It was an epic proclamation.There are jaded New York theater-goers who believe Broadway has disintegrated into a commercially driven hit machine. They may roll their eyes at Hamilton's $30 million advance sale or opening night fireworks.To those I say, put that aside and go see it to restore your faith in the art form. It is not a show for a wandering mind and glazed eyes.Hamilton demands that you engage.

Does Hamilton shine without its star? Not only does it shine, it's a constellation.

Matthew Wexler is a contributor at Gothamist. He also edits Passport Magazine's The Broadway Blog. Follow him on Twitter at @roodeloo.

#Alexander Hamilton
#hamilton
#Hamilton the musical
#javier munoz
#lin-manuel miranda
#original
Do you know the scoop? Comment below or Send us a Tip