DMC: MCA's Memorial Planning Is A Little Complicated, But It Will Happen

At this point there's no word about an official public memorial service for the late great Adam Yauch, the musician and filmmaker who succumbed to cancer at age 47 last week. But we ran into rapper DMC at The Moth Ball last night, and he hears there will be a memorial for Yauch (a.k.a MCA) this week, but the planning is a little complicated because while Yauch's family is Jewish, he was a practicing Buddhist for most of his adult life.

"The problem is this: he was Jewish, but he became a Buddhist," DMC told us. "So they've got to figure out how to honor both of them. I'm sure that the family's going to have to do the Jewish tradition, but then all his Buddhist people are going to have to do the Buddha thing too. I don't know if it's going to be a funeral or whatever, but there's definitely going be a memorial. Hopefully the Jews and the Buddhists can get together at the memorial. That'd be even cooler!" 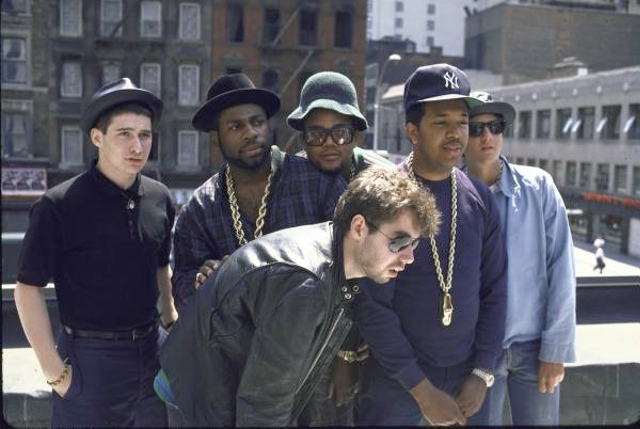 Back in the DAY (via LIFE)

DMC did not know if the memorial would be open to the public, and Beastie Boys management has not yet responded to our inquiry. Nevertheless, we do know of one "unofficial" event Thursday night at Brooklyn Bowl, which is throwing a "Beastie Bowl" tribute with a screening of MCA's inspired concert film Awesome: I Fuckin' Shot That on all their HD screens, with full concert sound. (The documentary, which covers the Beastie Boys' 2004 Madison Square Garden show, features a mix of pro-shot footage with coverage from 50 audience members who were given cameras before the show.)

After the screening, Eclectic Method will play a "very special" Beastie Boys tribute AV performance, which will be followed by DJ ?uestlove's weekly Bowl Train residency—you can expect a lot of Beastie Boys and Beastie Boys-related music at that. Brooklyn Bowl will also be offering $5 "Brass Monkeys" from 7 to 10 p.m.

Last night, we asked DMC for his thoughts on Yauch's passing. "Well, I knew he was sick, but I didn't think he was going to die," DMC said. "But that would be a little naive to say about cancer. You know, because cancer's a killer. But I had hope that his hip-hopness would be able to conquer this disease. When I first heard it though, people were asking me what I was feeling, but I was down at the Kentucky Derby. I did a sound check and all my friends were like, 'Yo, MCA just died,' and I was like, 'Where'd you hear that,' and they said, 'On the internet.' So, I don't believe nothing on the internet, but then my publicist called me and asked, 'Do you have any words to say?' And I was like, 'Yo, don't tell me MCA passed away.'

"Well, MCA as an artist was cool. I remember when I first met him in the Beastie Boys, they were some of the coolest punk rock kids that I ever met. Then they started hip-hop, and the powers that be and all the critics were like, 'Okay, first of all hip-hop's a fad, but there's no way that these black B-boys are gonna get with these white punk rock kids in the same big venues, in places like Madison Square Garden, LA Coliseum, and there's not gonna be no problems.' But there were no problems. We toured the world together.

"People gotta realize something: Run DMC kicked the doors open, but because of what we did, when we did the 'Together Forever' tour with the Beastie Boys, we changed the world. We showed that white people and black people can stand side by side in the hood, from the streets of New York. Whether you're in Beverley Hills or whether you're in a dirt poor ghetto, we proved that we could all get together. And we took that message all over the world. Then we went over to Europe and it was just us and the Beasties: France, Italy, Germany and we changed the world. To this day that's why when you look at rock rap and rock metal and this and that, it's because Run DMC and the Beastie Boys were that example that it works."

We'll have more on the Moth Ball later. In the meantime, here's an interview with the Beastie Boys and Run DMC from 1987:

#adam yauch
#beastie boys
#dmc
#hip hop
#mca
#rap
#run-dmc
#the moth
Do you know the scoop? Comment below or Send us a Tip