East Williamsburg D.I.Y. venue Shea Stadium, a standby of the non-corporate music scene in the city, announced yesterday that they would be going dark for the foreseeable future while they attempt to go more legit.

In a Facebook post put up on Thursday morning, the team who runs Shea Stadium announced that because of "increasing pressure from the local authorities it's no longer sustainable for us to continue to operate the way we have over the past 8 years," and that while "steps are being taken to acquire the necessary permits to secure both the short and long term future of Shea," it's not possible for the venue to stay open while those improvements are being made. 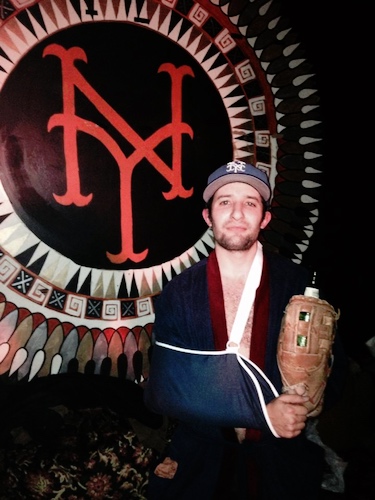 At the moment, the venue operators are promising to reopen as soon as possible, but will be relocating all of the shows that were set to happen there.

The venue was raided and shut down by the police and fire department in January, but reopened afterwards.

Shea, which was opened by members of Brooklyn punk band The So So Glos in 2009, had been a mainstay of the D.I.Y. scene while other small venues like Death By Audio, 285 Kent, Brooklyn Fireproof, Spike Hill and Glasslands closed in the past few years.

The space, which is owned by seven Lebanese brothers who can often be seen out in front of their furniture shop across the street during shows, has been a home to small local acts and larger national touring bands, and keeps an archive of their live shows on their website. It's been the home of monthly comedy show The Macaulay Culkin Show for the last three years, and also has a great mural of the Mets logo on one of the walls (to your right, you can enjoy a picture of me standing in front of it in my "Tommy John surgery Matt Harvey" Halloween costume).

There are no complaints from the Department of Buildings or Housing Preservation and Development according to both departments' databases. We've reached out to the owners of the venue for comment, and will update this story if they respond.

#just bad news all around
#rock and roll will never die
#shea stadium
Do you know the scoop? Comment below or Send us a Tip