Dive Into Capital, A Thousand-Page Anti-History Of NYC

If Kenneth Goldsmith’s Capital is anything, it’s a lot. The book is 986 pages, weighs 3 ½ pounds, has a gleaming gold cover, and took a decade to finish. Its goal is both simple and impossible: dig up accounts of New York City from throughout the 20th century and determine why, for a hundred years, it reigned as the capital of the world. But Capital is not a history book—it’s something much more messy and strange. “I don’t need need to tell the story of the history of New York, it’s been told a million times,” Goldsmith said. “This is the shit that falls between the cracks, descriptions of the city that would never make it into official histories.”

Capital is built of thousands of citations—clippings from novels, letters, reportage, poems, memoirs, and even ads, presented as-is without commentary and arranged into sections that Goldsmith calls “convolutes.” These include familiar topics like TIMES SQUARE, POVERTY, and SUBWAY, but also more novel headings including DREAM CITY, POETIC EMPIRE, AIR, BODY, and DEATH. The entire project was inspired by Walter Benjamin’s Arcades Project a colossal assemblage of writings sourced from 19th century Paris. Benjamin viewed Paris as the global capital of the 19th century, and the unofficial, subjective history found in Arcades is what inspired Goldsmith. “It’s the negative version of history, which really happens on the streets, in between the buildings,” he said, “and I wanted to do the same thing. I wanted to write a whole book about New York that would never appear in the history books.”

“What is this thing, is it a history? Is it a poetry book? A reference book? I love the idea that I don’t know what it is.” 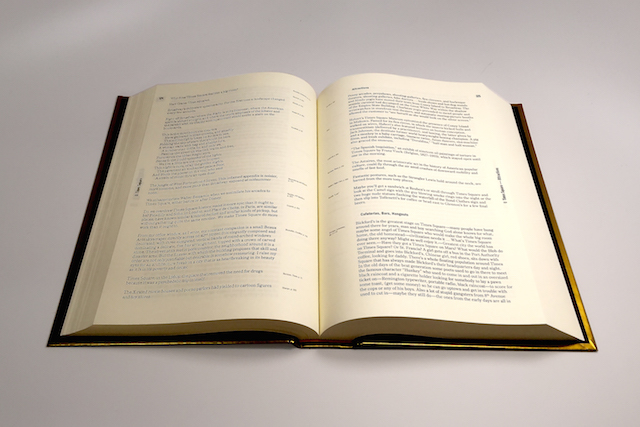 But then, what’s actually inside of Capital? For starters, there’s Dada and billboards and hissing tenement radiators coming back to life in the fall. There are Coney Island bodybuilders strutting like “pagan gods” and bars like The Mudd Club, Max’s Kansas City and Crisco Disco. Goldsmith has dusted off an organ playing in Trinity Church, jazz trombone on Sutton Place and De La Soul blasting out of a Houston Street boombox, cutting the “sheer white noise.” There’s a John Cage poem about window displays, Jay McInerney shouting “DIE YUPPIE SCUM,” and, of course, two World’s Fairs.

Capital is an organized, no-holds-barred collection of wisdom and bullshit, prayers and hate speech, sly jokes and obituaries; some appear as glib metaphors (a FOOD citation: “walking lunchrooms”), and others are lush narratives (a DOWNTOWN entry, sourced from Michael Small, goes on for hundreds of words describing Pyramid Cocktail Lounge in the '80s, where drag queens draped in plastic oranges danced for $110 a night). The 20th century New York soul that Goldsmith has reanimated in Capital is worn out and driven wild, desperately striving to become a sharper individual and, yet, to not be alone.

“For such a big book, there’s not that many sources,” Goldsmith, whose poetry has been described as "elevating copying to an art," admits. “Everything was compiled for me.” For ten summers he took advantage of the anthologies at Bobst Library and the University of Pennsylvania, where he teaches poetry. “What I was able to take off the shelves is a fraction of what was there.” As research progressed, Goldsmith found co-conspirators in Gay Talese, Joseph Mitchell, Paul Auster, and Phillip Lopate, but the biggest local star of Capital is E.B. White. All of Here is New York appears, in bits and pieces, throughout the book, chopped apart and strewn into different chapters.

Of course, Benjamin’s ghost haunts these pages as well; in The Arcades, Baudelaire is held up as 19th century Paris’s artist-hero, while Baron Haussmann is its urban planner-villain. Goldsmith finds his perfect New York counterparts in Robert Mapplethorpe and (who else?) Robert Moses. 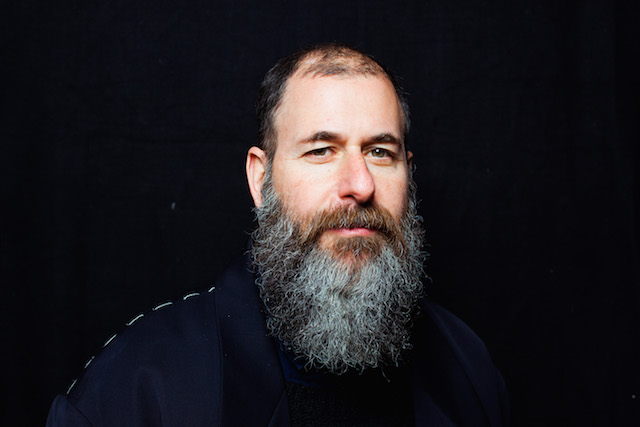 Goldsmith grew up as a self-professed Long Island Jew and first moved to New York City in 1979, when “there was only one fucking place in America to be.” Still, despite his age and the historical nature of his book, nostalgia is something he passionately shuns. “The best time in New York is always now,” he almost shouts, gazing at the Manhattan skyline from a Dumbo warehouse just days before Capital’s publish date. Goldsmith has always been a creature of the present—he worked for years with no real vision of a final product. “I put kind of a description of this up on Poetry Foundation when I was working on it five years ago,” he remembers. “[But] I thought I’d never see this thing published. I figured I was just going to write this crazy book that was unpublishable.”

But, against great odds, Capital has been published, and pried open and laid out on the table, the tome itself is fearsome; like New York City itself, it’s easy to wander aimlessly through its sections as you search for the next best thing. Your eyes will linger, backtrack, and jump ahead. It’s easy to get lost, and Goldsmith’s tactic of including citations only makes Capital that much more cacophonous. During the writing process, Goldsmith explained that he considered himself more of a sampling, record-spinning DJ. His work curates and then reframes— he is certainly not the author of what’s in Capital, but rather the man who brought it all together. “It’s my whole voice, though I haven’t written a word of it. It’s my autobiography, but I haven’t written a word of it.” It’s also worth noting that, like many shrewd DJs, Goldsmith and publishers Verso Press stole it all. Capital has no permissions page (“We just took everything!”) and, when he looks back on it, Goldsmith marvels that it even exists at all.

Amidst the riots, flickering neon, police patrols, stacks of Sunday papers, and rentable live lions at $250 per day—between Ginsberg and Beckett and Warhol and Didion and Rothko and Revs, something that might almost be called a “theme” begins to appear. Capital’s most important endeavor—its unifying thread—is its own muchness, and Goldsmith has allowed these citations to perform their own collective point. The book is an ever-rising crescendo of voices talking over and past one another inside a very confined space, and together that energy becomes the heat and light that made New York City the 20th century’s most necessary city. Capital is as enriching as it is unwieldy, and a must-read for anyone who has even a little skin in this game. Ultimately, with both New York City and Goldsmith’s book, all you have to do is say “yes”; to begin. Then, suddenly, everything comes at you all at once.

Capital is now on sale from Verso Books

#capital
#kenneth goldsmith
#nyc history
#longform
#original
Do you know the scoop? Comment below or Send us a Tip