Kathryn Bigelow's directorial visions have spanned genres, from the freewheeling surfing bank robbers of Point Break to heady science fiction voyeurism in Strange Days, from the police thriller Blue Steel to submarine intrigue in K-19: The Widowmaker. We spoke with the former painter this week about her new movie, the Venice Film Festival Grand Prize-winning The Hurt Locker, which is set in a land that Americans seem increasingly inclined to look away from: Iraq.

Bigelow was somewhat guarded about the Hurt Locker's prospects. But it would be a shame if her thrilling, visceral film is met with the same box office indifference that greeted previous Iraq-war movies, especially since hers doesn't get bogged down "dealing" with politics or message, except tangentially, by offering an immediate, hip-level view of the war from the perspective of the Army’s elite Explosive Ordnance Disposal (EOD) squad. These are the soldiers you call when you think you see an IED on the road or in a crowded marketplace; upon arrival one of them usually ends up donning a protective Kevlar suit which (hopefully) protects the wearer from less devastating blasts. Not a fun job, but it sure makes for riveting entertainment when observed from the air-conditioned safety of an American movie theater.

Screenwriter Mark Boal, a former Village Voice columnist who drew upon his experience as an embedded reporter with one such squad, joined Bigelow during our phone conversation. (Except where otherwise noted, all responses are Bigelow's.) The Hurt Locker opens tomorrow, and the two collaborators are in town to participate in Q&As following multiple screenings Friday and Saturday night at the Sunshine, and at two Sunday matinees at AMC Lincoln Square.

A number of films that try to tackle the war in Iraq have failed to win much of an audience. Do you worry your film might meet with the same resistance? No, actually. And we're not really able to hazard a reason why that is.

You're not going to hazard a reason about other films set in Iraq, but what about yours? Mark Boal: You know John, that's actually kind of just in terms of... Empirically, that's actually not true, because none of the movies that have come out have actually been set in Iraq. [Ed.: Battle for Haditha, Redacted?] But we feel pretty good coming into the weekend because we're getting great critical response, and it's a different kind of movie; it's really a movie about the bomb squad and that I think that's what separates it.

Did I read that some of the actors weren't staying in air conditioned quarters? Boal: I don't know, did you read that? Bigelow: He's talking about during the day. On a typical shoot in Los Angeles an actor would have his or her own trailer and those really were not available in Jordan. So we created these sort of Bedouin style tents that the cast and crew utilized when they weren't on camera. They told me that they loved it, and I think it contributed to make it more immersive than one would have normally imagined. 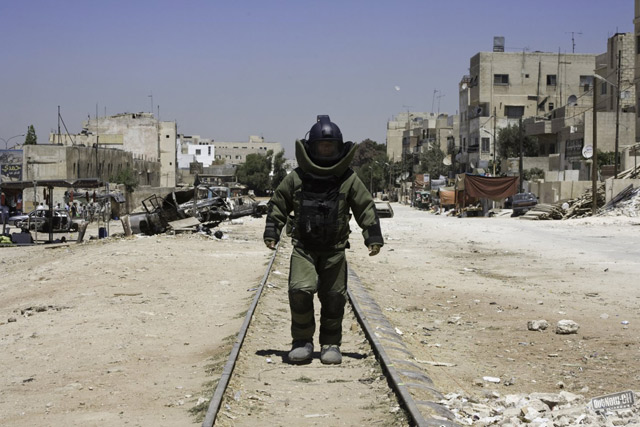 While you were shooting, I understand you had some encounters with Iraqi refugees. Did that impact your process at all? That was certainly one of the great bonuses to shooting in Jordan I didn't anticipate. In fact, many of them were actors, living in Jordan as refugees. The gentleman who plays the suicide bomber near the end is actually, from my understanding, a fairly well-known Iraqi actor when he was working and living in Baghdad.

Did that color anything that happened when you were shooting? Yes, in the sense that I wanted to protect the reportorial nature of the script and keep the immediate, raw, visceral aesthetic. Because the genesis of it was Mark's own observations, that only helped to underscore a certain realism and the authenticity. So that was, as i mentioned earlier, a big bonus.

Have you shown the film to any soldiers, and if so, I'm wondering what their reaction has been? Boal: We have, and quite a few active duty and retired military have seen it, and it's really gratifying when they come up afterward and say thank you for, you know, for making a movie that gets it right. And the memorial foundation has been particularly supportive. But it's also gratifying when people see the movie who aren't Army or military or Navy. Because unless you've been there it's really kind of hard to convey what the war is like, and the front line soldiers know what it's like; they don't need to see a movie about it. But for the general public, if you want an interesting and thrilling cinematic movie experience, if you like Black Hawk Down or you like Platoon or those kind of movies, I think this one might be pretty appealing, so it's great when people recognize that.

So Kathryn, why did you get involved in the project? Because I really admired Mark's incredibly well-crafted script and I thought the characters were intriguing. And to me it was an opportunity to look at the lives of individuals who have the world's most dangerous job. I thought that would make for a pretty interesting cinematic exploration. 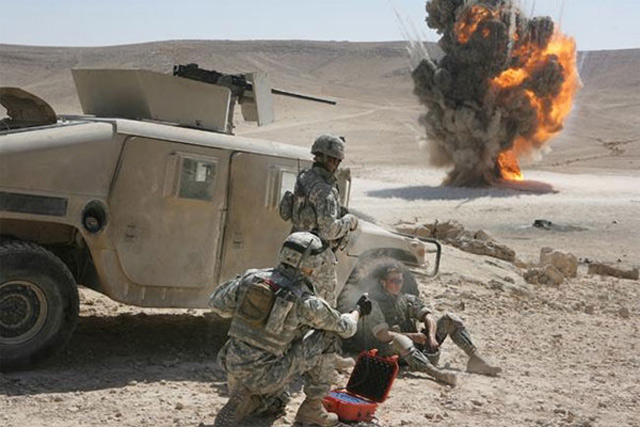 I don't want to spoil anything, but there's this part in the film that is so extraordinary, it's something to do with a body bomb, which I assume is a real thing, but I didn't really know about this. Can you explain what this is? Boal: Well, I don't want to give away the movie too much, but let me say this. What makes the movie so suspenseful is that you don't necessarily know where the bomb's going to be. The bombs are small enough, roughly the size of a bottle of water, that they can be placed anywhere your imagination takes you, including that.

Kathryn, I was reading David Denby's review in the New Yorker, and in it he describes you as "obsessed with violence". Do you agree? Well, I certainly know that a number of films I've made involve characters who have peak experiences and there's a lot of, certainly, a filmmaking process that is experiential. So in other words, it's a way, I suppose, to sort of push the medium somewhat. And so I can appreciate the observation about the choice of characters, the choice of story.

You work with a variety of different subject areas, from vampires to surfing bank robbers to science fiction. Do you consciously choose projects where you'll immerse yourself in new territory, or does this just seem to happen intuitively? Well, I certainly always look for a challenge. That certainly draws me to a particular project, but even more than that, it would be provocative characters who are original and unique and worth exploring in a feature length film.

In last week's Times profile Manohla Dargis wrote about the submarines in K-19 as evocative of Richard Serra's sculptures, the Torqued Ellipses. Did any works of art or music inspire you with The Hurt Locker? I think what's unique about The Hurt Locker for me is the adherence to reality. That was the fundamental inspiration: Mark's reporting and ensuring its authenticity and accuracy. That was really the jumping off point, that was really the inspiration. I wanted to make this movie as rigorously realistic as possible.

Do you have another feature film project that you're working on now? I'm working on a few things but right now, as you can imagine, I'm working on the promotion of The Hurt Locker. But I am working on a couple projects, yes. They're sort in an embryonic stage. It's a little premature to discuss, but hopefully once this comes out I can focus on them.