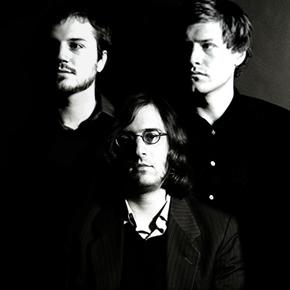 Die Romantik (myspace, website) is a guitar, drum and keyboard trio with a knack for weaving lush, elegant melodies that never lose the element of surprise. Brooklyn by way of France, the group has developed a local following that recently earned them a spot on the lineup for Malajube’s show at Bowery Ballroom. Their debut full-length album, Narcissist’s Waltz, was summed up by Stylus magazine thusly: “An album of sophisticated arrangements and lullaby melodies that see gloom in revelry and revel in gloom…until it takes on a bewitching, harmonious shape.” They play their final show of 2007 Friday night at Soundfix in Brooklyn; Julianna Barwick opens.

Your album Narcissist's Waltz was recorded at an isolated chalet in the Catskills. How and why did that come about? We wanted to really take our time with the recordings and not have money and time limitation hang over our heads the whole time. We tried various ways to do it but in the end we figured that the ideal way to do it was complete isolation and dedication to the recording process.

How did it affect your recording process? The chalet played a very central role in the recording. We had very little contact with the outside world over the nearly two weeks we ended up spending there, and really were able to take our time to get just the right parts and sounds we wanted. It also affected our general recording philosophy in that we decided to stay pretty much away from effects and go with a very raw production sound. We used the very warm natural reverb of the chalet on the tracks to really capture the mood of the place. It was also very intense to be all living in essentially one room and working so closely all day and late into the night, and I think that much of that intensity came through on the recordings.

You're originally from Paris. What brings you to New York? We are from pretty diverse backgrounds, not specifically from Paris. We grew up there, but all went to international schools, working with the American school system. I think that most students who went to our high school end up coming to the States for college. We were spread out between New York, New Haven and Boston when in college, but we kept playing together and eventually all converged towards New York because... it's New York!

How did your band name originate? Olivier had this CD, a German compilation of composers from the romantic classical era. We liked the name, we like the music.

What's been the biggest disagreement in the band so far? We actually split up for a little while in 2005, not because of a violent disagreement, but what we had concluded were divergent musical views.. It gave us all time to re-evaluate what we wanted from music and why we were playing together, though, and in a way made us all the closer and more dedicated when we re-formed.

What's the most memorable encounter with a fan you've had so far? Two Italian girls who came to NY just to see us and another show during CMJ!

What was the first venue you played in New York and what do you remember about that show?
I think the first New York show we played might have been the West End Cafe. Eric was in Columbia at the time, and our music was very, very different. Our approach to performance was also very, very different... We don't really remember much of that performance, but we played through our set very fast.

What was the worst gig you played and why?
Ah yes... Years ago we played this pretty memorable show. Not sure how we can get this across, but we were very excited to have gotten booked. There were maybe 3 people in the audience, including Olivier's mother and her group. We also tipped the sound guy to record the show. He did so, with a line out from the soundboard, which consisted of Olivier's vocal, the kick drum, and the lead guitar, as we were not yet in the habit of bringing amps to shows (they are heavy, after all). So the recording was terrible, the show was terrible, we were terrible. Fortunately, only Olivier's mother saw it, and she has since forgiven us.

What's your favorite place to hear live music in New York? Barbes, in Park Slope, and the Music Hall of Williamsburg.

Please share an unforgettable "only in New York" story. We kind of got scolded by some random guy for not being able to summarize our music in a concise sentence when he asked us. He was totally friendly and kept telling us that he was a "financier" and talking to us about his "good friend David Byrnes", whom he only refers to using first and last name, and with a wrong last name... But yeah I don't really know where else a random middle aged guy strolling around would yell at a band who is in the process of loading in for a show for not having a good sales pitch. Anyway we gave him a CD, we figured he had earned it!

What neighborhood do you live in? What are its pros and cons? We live in Greenpoint. Eric has strong views on food, so, pros: Unlimited access to sausages. Cons: Nowhere to buy fish.

What's your favorite bar at the moment? We don't go out much, as we are desperately broke, but the Russian Vodka Room has long been a standard.

Who is your favorite New York City band these days? Apes and Androids.

If you could change one thing about New York what would it be? Rubber wheels on the subways?

You're on a cruise. The ship is sinking! When you wash up on a desert island, you realize that you grabbed three CDs to take with you before jumping ship. What are they? Dominic: Thelonious Monk's Solo Monk, Daquin's Nouveau Livre de Noels, and this CD of Bulgarian folk music called "Folk Magic". Olivier: Serge Gainsbourg's Melody Nelson, Chopin's Nocturnes, and Aphex Twin's Selected Ambient Works I and II. Eric: Best of the Bee Gees (the early material), a Vladimir Vissotsky album called Le Vol Arrete and the Best of The Delfonics.