Diddy Did It Again 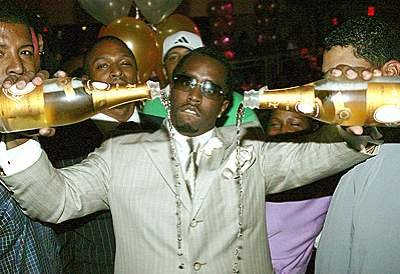 Sean Combs clocked a 31 year old clubgoer in SoHo on Sunday, right in the kisser...twice. Oh yes he Diddy! The rap mogul was at the after-hours club Kiosk (located at 95 Spring Street) when the rumble went down, and he's yet to turn himself in. amNewYork reports that "he was expected to appear at the First Precinct this morning for questioning."

Police would not identify the victim in the case but they said First Precinct officers responded to a 3:15 a.m. call for a fight at the club. They found a man, who was identified as Steven Acevedo, suffering from at least two wounds to his face, the result of two punches Combs allegedly landed.

Apparently the fight was over the woman who hung off Diddy's arm at Cannes this summer, also the former girlfriend of Acevedo - who claims at one point during the fight Sunday Diddy said he would kill him as his bodyguard showed he had a gun to do just that.

Being a complete stranger to the "no snitching rule" Acevedo fled the scene and called the cops from the safety of his own home. They are currently talking to witnesses and "Combs will be charged with a misdemeanor - third-degree assault - and given a desk-appearance ticket for his role in the incident," though he won't face any jail time. His bodyguard, however, may not be so lucky with a possible gun charge against him.

Combs is no stranger to love woes and violent incidents, and The Post has a pretty good wrap-up of his rap sheet here.

Update: Diddy's lawyer, Benjamin Brafman, said, "We are hopeful that this matter will be resolved without the filing of any criminal charges, as this was a disagreement among acquaintances, not a criminal assault...What is being reported in the media is inaccurate. Mr. Combs is not going to be arrested today."