Did You See The Double Rainbows Over Manhattan This Morning?

I was walking to the ferry this morning (yes, sometimes I take the East River ferry when it's raining and I "can't" ride my bike; it's only $1.25 more than the subway or bus, it's faster, and considering I'm saving money commuting by bike every other day, I think I can allow myself this one indulgence leave me alone) when a woman behind me called ahead to her young son, "Rainbows!" Accurate.

Full double rainbow arching its way over NYC from my living room window. Did anyone else catch that?! #magic 🌈

For some reason I had been looking down at the murky river as I approached the dock, not up at the sky, and didn't even notice the two rainbows at first. In some alternate dimension, another version of me probably got on the ferry and went to work without ever knowing about the rainbows, until a tipster sent this photograph via email: 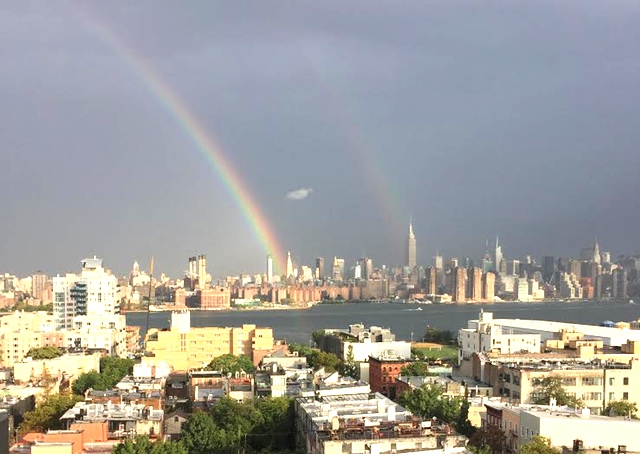 And then this other dimensional version of me is now wondering how I could have been so incredibly oblivious to the miraculous beauty of this planet. But you can't beat yourself up, alternate dimension John. Like Francis Ford Coppola says in the Hearts of Darkness documentary, life is about the opportunities you catch, not the ones you miss. Maybe I'll rewatch that tonight in that other dimension. Good movie.

Wonderful round double rainbow in NYC moments ago: pic.twitter.com/KKXxcLT66R

Ideally, I'd watch Apocalypse Now Redux and then follow that up with Hearts of Darkness but unless I have Friday off in this other dimension that's probably a bad idea. I've been going to sleep really early in this dimension lately—like before 10:30—and it's been working for me.

On a side note, there is a theory that the Radiohead song "Reckoner" deliberately features the lyrics "in rainbows"—the title of the band's masterful 2007 album—exactly at the "golden ratio" of the record. Stereogum explains:

IT'S ALL HAPPENING WE ARE MADE OF RAINBOWS BLESSED

#nyc
#rainbows
Do you know the scoop? Comment below or Send us a Tip