Did You Know There Used To Be A Movie Theater In Grand Central Terminal? It's true, there was a movie theater inside of Grand Central Terminal for decades. More recently, you may have purchased some wine in the store that currently operates in the space that it used to occupy (across from Track 17). And it's even got a ceiling to match the one above the Main Concourse.

An old article from the Daily News explains that in the 1990s, while the Terminal was undergoing renovations, "workers removed the false ceiling of a former photo shop at the southwest end of the Graybar Passage, [and] came upon a dirt-encrusted mural on the original arched ceiling. When cleaned, the mural depicted a planetary scene with shooting stars." This ceiling was originally part of the Theatre, which was designed by Tony Sarg, and opened in 1937 (though there are conflicting reports on that year—others believe it opened in 1930, and other still in 1929). According to the April 1937 issue of Motion Picture Daily, the Grand Central Theatre was set to open on May 3rd of that year. 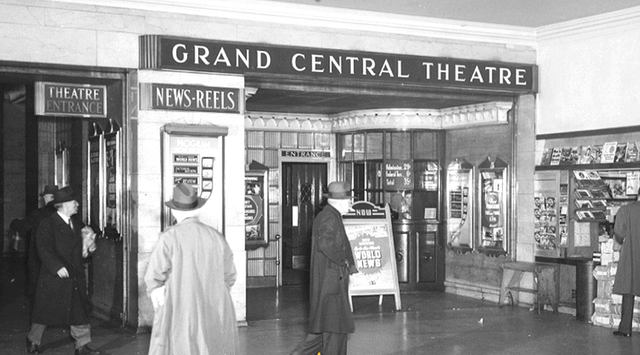 The NY Times also reported on its opening in 1937:

"The theatre has come into being in the last month or so and will opened for the slow-footed and the dilatory (or anyone else who cares to go to Grand Central to see news reels) on Wednesday morning, just about the time the coronation gets well under way. The progenitors of this capital idea are all men who have cooled their heels time after time in the vaulted loneliness of the Waiting Room... Chief among them is John Sloan, of the architect firm of Sloan & Robertson. Mr. Sloan [who] was a commuter until last year."

When the Times dropped by during before the opening, they spotted Mr. Sarg, who they heard telling a painter, "Paint the ceiling a flat sky blue, and some time tomorrow I'll come around and paint the stars on it myself."

Sarg also included maps on the walls, and the Times reported that his "illustrated mural cartography is completely without political significance." 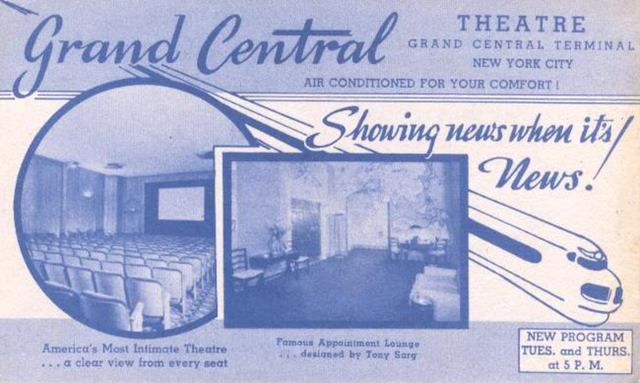 The theater itself had (an early version of) stadium style seating (242 seats in total), and according to The Harlem Line blog, "above the screen an illuminated clock displayed the time for those people on a schedule" (though in this photo it looks like it was off to the side). According to Cinema Treasures, "At the rear of the auditorium was a standing-room section, and a small bar was located near the theater’s entrance." The bar may have been added later. 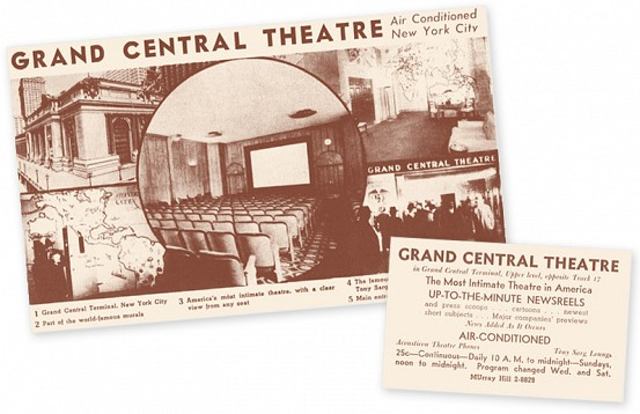 The theater cost $125,000, which included the cost of an elevator "which will bring patrons from the lower level, and intricate air-conditioning system, and acoustic apparatuses for people hard of hearing installed in twenty-five seats." Patrons paid a quarter at the turnstile to get in.

It remained open for about three decades, and during that time played everything from the news to shorts to cartoons. Some more tidbits on the the old theater: 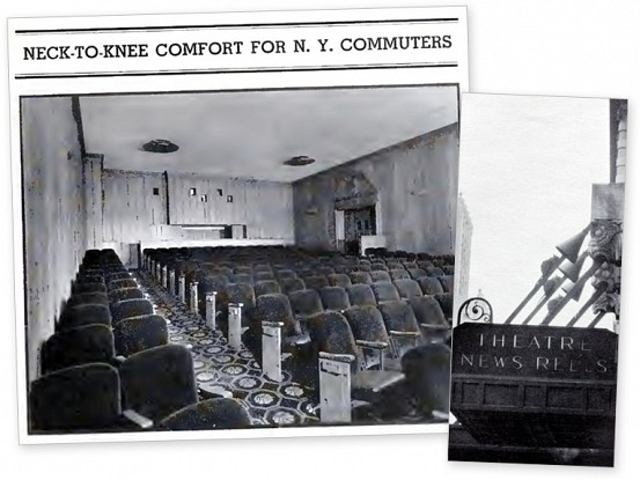 #flashback
#gct
#grand central
#grand central terminal
#grand central theatre
#history
#original
Do you know the scoop? Comment below or Send us a Tip
A new Gothamist is coming! We’ve moved comments over to our beta site. Click here to join the conversation and get a preview of our new website.