Did You Know The Props On 'Melrose Place' Were Covert Works Of Art With Coded Meanings?

Beverly Hills, 90210 and Melrose Place were a big part of the television landscape in the 1990s—mainstream and prime time, it's hard to believe they were anything more than shiny platters serving youthful audiences hot new products and societal norms. But it turns out Melrose Place was secretly sending you coded messages about HIV awareness, women's rights, gender roles, same-sex marriage, and environmental issues.

In 1995, artist Mel Chin somehow "convinced the producers of Melrose Place to let him and a group of artists/students/teachers (aka GALA Committee) replace props with conceptual artworks," which would turn up in episodes. We're told "the covert works had coded meaning... issues from the '90s that continue to prevail today; nostalgia meets contemporary life. He turned network television into a powerful venue for public art, reaching millions of people worldwide."

Over several seasons, the artists produced a range of subversive objects which updated art historical movements like Dada and Surrealism, hinted at the unfolding plotlines (they were provided with scripts ahead of time), and subverted the form and content of a ‘90s pop-culture mainstay. 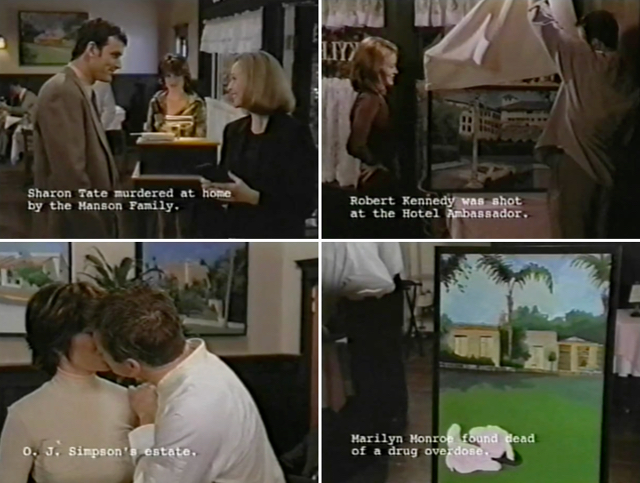 Paintings depicting locations related to high-profile murders and deaths were slipped into the background.

Flying under the censor’s radar, the props were slyly critical of social norms and aware of their place in the Duchampian tradition of the readymade. A set of sheets patterned with unrolled condoms (an image banned by the FCC) was used to criticize the absence of birth control shown on television. In a takedown of irresponsible alcohol advertising, a parody Absolut vodka ad poster featured a liquor-bottle shaped crater marring the Alfred P. Murrah Federal Building, site of the Oklahoma City Bombing. Beyond mocking the constraints and mores of broadcast entertainment, the GALA Committee’s interventions furthered a progressive agenda as urgent today as it was twenty years ago.

On September 30th, the works of art made for the show will—for the first time in NYC—appear under one roof. This comes courtesy of Red Bull Studios New York, who shared a couple of examples we'll be seeing:

Baby Mobile with Wrapping Paper by Gala Committee.Based on television remote control. The special gift wrap is rendered in television static. Billy says to pregnant Alison, “Something for the baby, to keep you from going totally insane.

RU 486 Quilt by Gala Committee. Homemade quilt with pattern of chemical structure of the drug RU 486 that was banned in the US until 2000. A pregnant Alison, who doesn’t have a choice, works at home under the RU 468 Quilt.

In the words of Lelaina Pierce, "Melrose Place is a really good show."

The first New York exhibition of Melrose Place’s Covert Conceptual Artworks will take place from September 30th through November 20th, at 220 W 18th Street. Previously they exhibited at MoCA in Los Angeles—an exhibit that itself was part of Melrose Place (season 5, episode 29).

#art
#gala committee
#mel chin
#melrose place
#props
#original
Do you know the scoop? Comment below or Send us a Tip